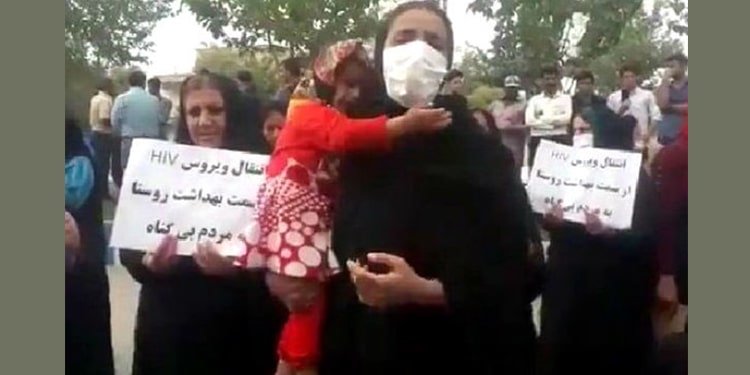 Hundreds including women, children infected with HIV in Chenar Mahmoudi

At least 300 women, children and even infants have been infected with HIV virus in Chenar Mahmoudi village apparently due to repeated use of disposable syringes for diabetes test by the clinic in this village. The angry residents of this village held protests outside the Governor’s Office and Department of Health in Lordegan on Tuesday and Wednesday, October 1 and 2, 2019.

Chenar Mahmoudi villages is located in Lordegan County in Charmahal Bakhtiari Province, in southwestern Iran. Local sources say, “Two months ago, some of the residents of this village noticed that after taking the diabetes test, some of them are suspected of being infected with HIV/AIDs. These patients did not stop at this point and referred to medical centers in Isfahan and Shiraz where the test results were also positive.” (The state-run ROKNA news agency – October 2, 2019)

Chenar Mahmoudi protesters say the agent from the House of Health had used contaminated syringes for multiple persons to take diabetes test, leading to the infection of a large number of residents of this village to HIV virus.

A six-month-old baby is among those infected with HIV. After the test, she developed a skin disease, chapped lips and started foaming at the mouth.

The regime’s officials pointed the finger at each other, ultimately blaming the paramedic working in this village and the head of the House of Health.

The chairman of the parliamentary Health Commission, Mohammad Hossein Ghorbani, brazenly blamed the residents and women of Chenar Mahmoudi for transmission of this disease, fueling widespread protests by the village’s women and residents. (The state-run ROKNA news agency – October 2, 2019)

One of the local residents said, “Agents of the Health House came to our village for insulin and blood pressure tests, but the syringes they used were contaminated. Everyone tested has contracted this suspicious disease which some people say is AIDS. Some say it is something similar to AIDS. Half of the villages of Lordegan county have been infected and no one accounts for this. Now, after several weeks, they have brought doctors from Tehran to repeat the tests and diagnose what this disease is.” Another resident said, “So far, 500 people have taken HIV tests and all had positive results. People have panicked. Many do not want to take another test. They say the Health Network does not account for anything and says they did not provide the syringes. The Health Network of Chenar Mahmoudi does not accept any responsibility either and blames the General Health Network.”

Chanar Mahmoudi village is presently placed under quarantine and no one is allowed to enter or leave the village.