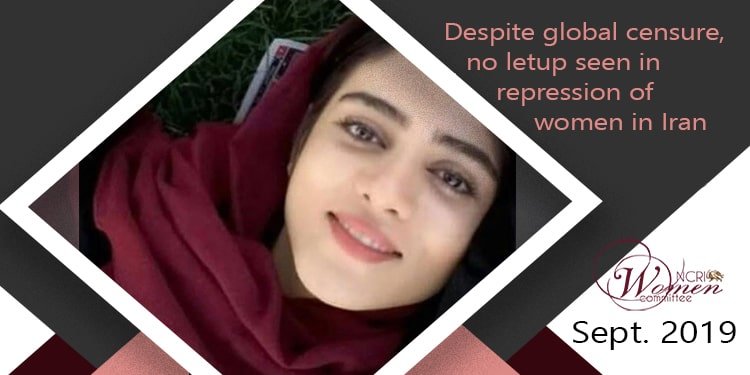 Despite global censure, no letup seen in repression of women in Iran

The world was shocked in September by the death of a young female football fan in Iran who set herself ablaze in protest to her six-month jail sentence for attempting to circumvent the ban on women’s entrance to football stadiums.

“What happened to Sahar Khodayari is heart-breaking and exposes the impact of the Iranian authorities’ appalling contempt for women’s rights in the country,” said Amnesty International in a strongly worded statement on her death.

There were also two significant censures of the Iranian regime’s abuses of human and women’s rights. The United Nations Secretary General expressed concern over widespread use of the death penalty in Iran and urged the regime to ratify the CEDAW among other international conventions.

The European Parliament called on Tehran to immediately and unconditionally release women’s rights advocates imprisoned for exercising their right to freedom of expression, association and peaceful assembly.

The regime’s Judiciary, however, continued to issue heavy sentences for female activists, level new charges against those already serving their prison sentences, and put various other forms of pressure on political prisoners and activists, without letting up.

It further hanged two women, issued death sentences for another two women, and handed down flogging sentences of 50 lashes for eight women who participated in a mixed-gender Yoga class.

The clerical regime also continued in September to escalate restrictions on women’s dress code and gender-segregation and step up social repression.

Another major development was finalization of the VAW bill. The bill had been stalled for eight years, being passed back and forth among the parliament, Guardian Council and the Judiciary. The Judiciary finally passed the bill to the government for ratification, however, it has been totally overhauled in letter and in spirit.