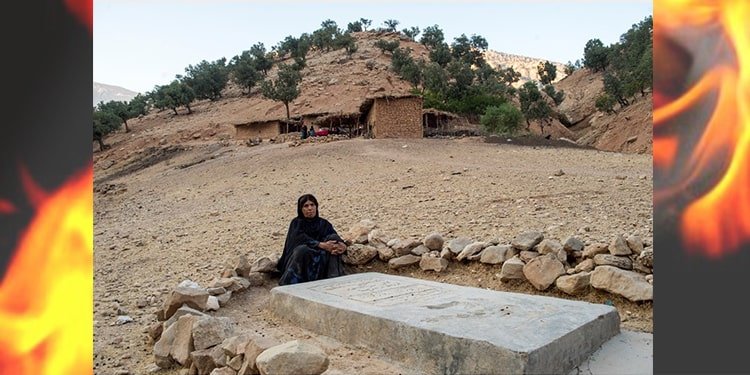 Tragic self-immolations of women in Dishmuk – During the last six months, 11 women have set themselves ablaze in the small city of Dishmuk, in Kohgiluyeh and Boyerahmad Province, southwestern Iran.

Early marriages, domestic violence against women and girls, and poverty are among the main reasons of self-immolations of women in Dishmuk.

One of the examples of the tragic self-immolations of women in Dishmuk is the case of Soraya. She was married at age 11 to a 12-year-old boy. They had a lot of differences. Soraya’s husband threatened her. “Either leave or I will kill your little child.” A terrified Soraya goes to her room and douses herself with kerosene and sets herself alight.

Another young woman by the name of Kafi set herself ablaze since she got constantly brutalized by her father-in-law and brother-in-law. Kafi died at hospital after 20 days.

Ziba, a pregnant woman in Deli Village of Dishmuk, set herself on fire and died with her unborn fetus. Ziba had two other kids, four and seven years old, who were at home when Ziba self-immolated.

One of the women of Dishmuk says, “The women here are badly beaten (at home), so they set themselves on fire. There are many examples in the surrounding villages.” (The state-run ROKNA news agency – October 6, 2019)

Mohammad Noroozi-Nia, director of Dishmuk’s Education Department, said, “The rate of self-immolations of women in Dishmuk is high.”

He explained, “The main reason for Dishmuk girls dropping out of school is early marriage which is done based on the age permitted by Shari’a.” (The state-run Tabnak website – May 31, 2019)