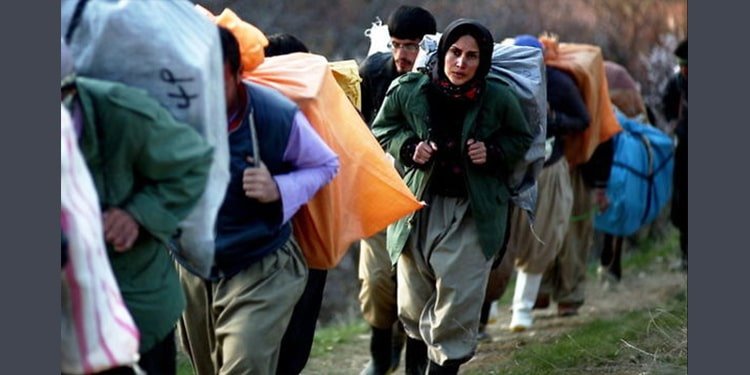 Female couriers are product of feminization of poverty in Iran

Many women and girls have joined the long line of couriers. This was revealed by Halaleh Amini, representative of the Iranian Kurdistan Province, while speaking on the situation of female couriers to the 23rd general summit of provincial councils.

Amini added, “It is most regrettable that we face women and girls who have to disguise themselves as men and join the long line of couriers.” (The state-run Tasnim news agency – October 10, 2019) Working as a courier (or koolbar as it is referred to in Farsi) is among the most difficult jobs. Profound impoverishment and destitution caused by inequality and unjust distribution of wealth in Iran, have brought about a growing number of couriers or porters which have now expanded to include female couriers.

Unemployment and prevalent economic problems in Iran, particularly in the border regions, have forced people in these regions to resort to such a difficult job to earn a meager living by risking their lives and carrying heavy loads on foot, walking along risky roads through the mountains in the cold and darkness.

Recently, teenagers, youngsters, and women are joining the long line of couriers in the mountainous areas of the border regions. Many of the children and teenagers have to drop out to engage in this job. In his July 2019 report to the United Nations, the UN Special Rapporteur on Iran, Javaid Rehman, addressed the problem of couriers and wrote, “According to information received, 75 border couriers were killed and 177 injured in 2018. Among them, 42 individuals were victims of direct shootings by security forces and 6 of them fell from the mountains after being chased by the security forces. A total of 14 died or lost a limb owing to the cold weather conditions and 4 others were wounded as a result of landmine explosions. 92 In the first six months of 2019, at least 42 border couriers were reportedly killed and 74 injured.”

Feminization of poverty on the rise, not eradicated in Iran - 2019