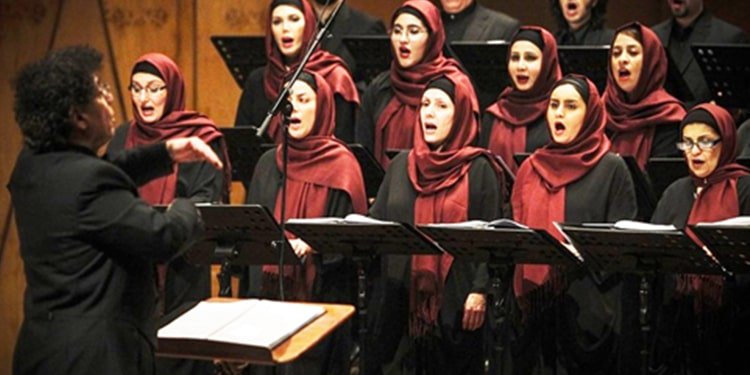 The 36th branch of the Revision Court of Tehran Province approved and finalized one-year prison sentences for six female singers.

Tehran Province’s Court handed down the sentences for the six female singers charged with unauthorized audiovisual activities, collaboration in making music and images, and airing them on anti-regime satellite networks.

In May 2019, a female singer was prosecuted for solo singing during a tour of Abyaneh, a village in Isfahan Province. (The state-run Fararu website – May 21, 2019)

In another event, Tehran’s Guidance Ministry Court summoned Matin Sotoudeh, a cinema, television and theater actress, on October 16, 2019, for the way she had dressed up during the screening ceremony of a movie.

Back in August, the commander of Tehran’s State Security Force, Hossein Ashtari, declared that posting pictures of people wearing dresses not complying with the official dress code is a breach of law. He added, “It doesn’t matter who is breaking the norm; whether an artist, an actress or a celebrity, all of them will be dealt with accordingly.” (The state-run ROKNA news agency- August 5, 2019)

Women have always been banned from solo singing under the mullahs’ rule and were targets of censorship. In the early years of Khomeini’s rule, female singers were literally forced to stop their activities and go home, and many had to leave the country. Many others were forgotten and left alone without being able to make ends meet. Only a small number of female singers that chose to tolerate the regime’s repressive censorship, were allowed to perform before a female audience.

Back in May, female musicians were banned from playing in a traditional music band supposed to perform in a charity concert at the auditorium of the Azad University of Qazvin. They were not allowed to even sit among the audience. (The state-run ILNA news agency – May 23, 2019)