A young Iraqi woman, Noor Marwan, studying in the Medical School of Baghdad, was killed during protests in Baghdad when tear gas canisters hit her in the head on Monday, October 28, 2019.

Hundreds of thousands took to the streets of Iraq this week in the second wave of protests against the government of Adel Abdul Mahdi and deep-seated government corruption. While as an OPEC member, Iraq is one of the world’s largest oil exporters, many Iraqis live in poverty and are deprived of clean water, electricity and basic medical services.

The protests and uprising in Iraq started on October 1, over unemployment and poor living conditions, but swiftly escalated into anti-government protests calling for regime change. Protests stopped for two weeks before resuming on October 25.

On the fourth day of the second wave of protests, on Monday, October 28, thousands of college students and school children joined the street protests in Baghdad. To disperse the protestors, security forces lobbed tear gas canisters at them.

According to medical and security sources in Iraq, security forces killed at least 20 persons and wounded 865, during Monday night’s shootings in Karbala.

Heavy clashes broke out on Tuesday, October 29, 2019, at Tahrir Square in Baghdad. The protestors chanted, “Baghdad free, free; Iran, out, out.” 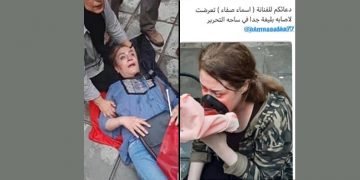 A number of Iraqi celebrities have joined their people in the streets during Iraq uprising. Asiyeh Kamal and Asma Safa, were among these famous Iraqi women artists. One of them got injured when a tear gas canister hit her and another suffered shortness of breath.

Female weight-lifters receive salaries only if they win medals