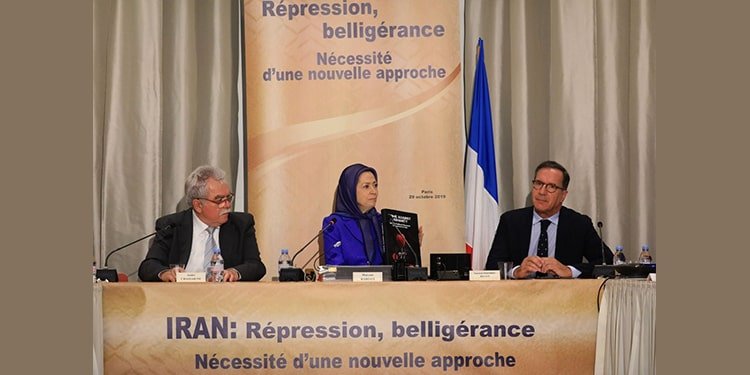 Seeking a pluralist republic based on gender equality in Iran

Maryam Rajavi: Seeking a pluralist republic based on freedom and gender equality in Iran

The Parliamentary Committee for a Democratic Iran (CPID) organized a conference at the French National Assembly on Tuesday, October 29, 2019, inviting Mrs. Maryam Rajavi, the President-elect of the National Council of Resistance of Iran, to address the “need for a new approach” by Europe and France to the clerical regime ruling Iran.

Speakers expressed support for Mrs. Rajavi, her initiatives and courage. They called for a more decisive policy on Iran, particularly in light of the human rights situation in that country. Excerpts follow of some of these remarks about Iranian women:

NCRI led by a woman heralds a free and democratic society

For several years, Iran has been shaken by unprecedented strike movements. After the nuclear deal in 2015, Iranian society sought better days, the days promised by the Rouhani government. In reality, however, nothing has changed. In the face of this situation, protest movements have increased several folds… Women often play an important role in leading the protests. The Iranian regime resorts to increasingly oppressive and inhuman punishments and heavy prison sentences to prevent the spread of protests… It is naïve to believe that this regime is able to moderate its behavior. On the contrary, the people of Iran have an organized alternative, led by a woman, Mrs. Rajavi. An alternative, which heralds a free and democratic society.

We, members of parliament, give priority to the sufferings of the people of Iran over all other considerations. We relentlessly send this message to the people of Iran so that they know that they are not alone and the world is in solidarity with them. And we, members of the French parliament will continue our campaign so long as freedom has not prevailed. We thank you for your presence here.

The people of Iran have been struggling for more than 40 years against a regime which is the world’s record holder of executions per capita. Since 2013, when Hassan Rouhani became president, some 4,000 people have been executed. And 120,000 political executions have been carried out under the mullahs’ regime since 1981, including the massacre of 30,000 political prisoners in the summer of 1988….

This regime has institutionalized discrimination against women in its laws. The highest number of executions of women in the world and their most vicious tortures have been carried out by this regime. Presently, a large number of women are incarcerated in Iran for their peaceful activities or their faith….

If inaction vis-à-vis the regime’s crimes in Iran and abroad persists, the clerics and their actions will duplicate new groups like Daesh…

As the leading country in Europe, France must take the initiative to open the path to democracy in Iran, and to support human rights, the Iranian people and the Resistance.

There is a democratic alternative capable of establishing a democratic and pluralist republic based on the separation of religion and state, gender equality, autonomy of ethnic groups, and a non-nuclear Iran.

The National Council of Resistance of Iran is capable of replacing this regime and peacefully transferring power to elected representatives of the people of Iran.

Our people, resistance and resistance units are prepared to achieve this, and we hope that Europe and France stand with the Iranian people and their legitimate demands and aspirations.

We trust your capability in carrying on this struggle

This is the second time that we have the pleasure and honor to welcome Mrs. Rajavi. Madam President, we welcomed you here in February. Since then, there have been extensive and intensive developments with regards to Iran. But I would like to recall that the first mission of the French Parliamentary Committee for a Democratic Iran is commitment to human rights in Iran and particularly the rights of women.

I am also very happy that this summer, me and my colleague, Hervé Saulignac, had a visit to Ashraf 3 in Albania. This was the first time I visited Ashraf 3, a city built in less than one year by men and women of the Iranian Resistance in Albania…

We visited an exhibition which was very impressive and moving… Despite being tragic, it showed the presence of an ongoing struggle… A very brutal regime is ruling Iran. The people of Iran are going through very difficult conditions. The economic conditions in the country are catastrophic and complicated.

Let me, once again, stress that we have complete trust and confidence in you, Iranian friends, Madam President. We are totally confident and we trust your capability in carrying on this struggle, particularly as we witness that the situation is on the move.

We should not abandon the courageous women of Iran

The people of Iran want more freedom, more equality, more democracy and a unique and special position for women, what we are witnessing here, today with the presence of Madam President… We must strongly emphasize that the current situation in Iran is unbearable. Women constantly defy the restrictions imposed on them as we have seen in video clips. They show utmost courage. We should not abandon them… The situation is different and change is on its way… Madam President, in CPID, we stand with the people for a democratic Iran. We will fight beside you with all the tools and possibilities that we have at hand.

I am an angry woman. Angry when I see how women are treated in some countries, especially in Iran which is one of the worst when it comes to violations against women. This is a regime that has institutionalized violence against women. It has tortured and executed thousands of women who opposed it. This regime arrested thousands of women last year for participating in anti-government protests. Experts have admitted that Iran under the rule of the mullahs has one of the highest rates in violence against women.

The most recent research regarding violence against women shows that 66% of Iranian women are victims of such violence in their lives. We must show our outrage not only in France but on the international level, because what is happening in Iran is not acceptable. This makes it an obligation for us to stand in solidarity; to be constantly aware of the world’s situation, especially in case of Iran.

We stand with you and we will eventually be victorious

In this committee, you enjoy the unquestionable support of the French National Assembly and Senate. I am also sure that the European Parliament, which I was a member of, supports you. I am aware of the good relations among the women and men of your movement with the MEPs. I know your organization and the EP’s ties with your struggle and organization… You can count on me. We stand with you and we will eventually be victorious.