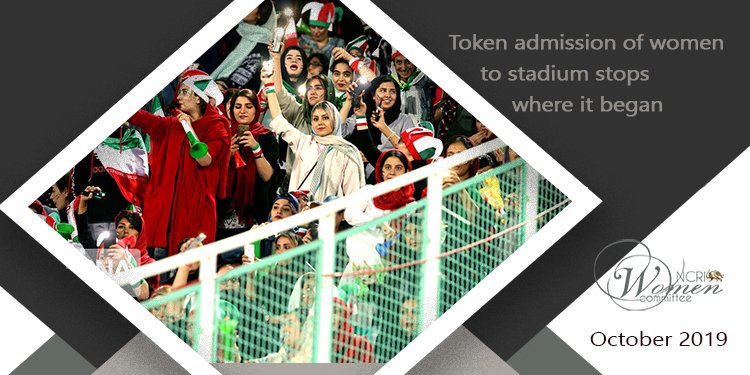 Token admission of women to stadium stops where it began

Iranian women managed to officially enter Tehran’s Azadi Stadium in October for the first time in 40 years. This was achieved only after domestic and international pressure built up on the regime after Sahar Khodayari, “the Blue Girl,” self-immolated in protest to a six-month prison sentence for her attempt to circumvent the unjust ban on women’s presence in Iranian stadiums.

The clerical regime’s retreat, however, stopped right there at the end of the 2022 World Cup qualifier soccer match between Iran and Cambodia, and is not going to be repeated at least until March.

Limited numbers of Iranian women were able to purchase tickets and enter Azadi Stadium on October 10, 2019. Shouting, “Blue girl, wishing you were here,” Iranian women showed that they owe their presence in Azadi stadium to the young woman, Sahar Khodayari who set herself alight in September.

A young woman held up a placard which read, “Iran’s Blue Girl, your name has become eternal.” Female security forces in the women’s platform attempted to arrest her, but other spectators prevented them from doing so.

Out of 100,000 seats in Azadi Stadium which basically remained vacant, only 4,000 were allocated to women. Couples were separated and women were bused to their platform to prevent them from going to other places around the stadium. The women’s platform was fenced off. Female State Security forces were stationed on alert. A considerable number of plainclothes agents were sitting among the spectators. Closed circuit cameras also kept every movement under control. Overall, women did not have any freedom of action…

October was also marked by a tragic development in Charmahal Bakhtiari Province, in southwestern Iran, where at least 300 women, children and even infants were found infected with HIV virus in Chenar Mahmoudi village apparently due to repeated use of disposable syringes for diabetes test by the clinic in this village. The angry residents of this and other villages in Lordegan County held anti-government protests lasting more than two weeks.