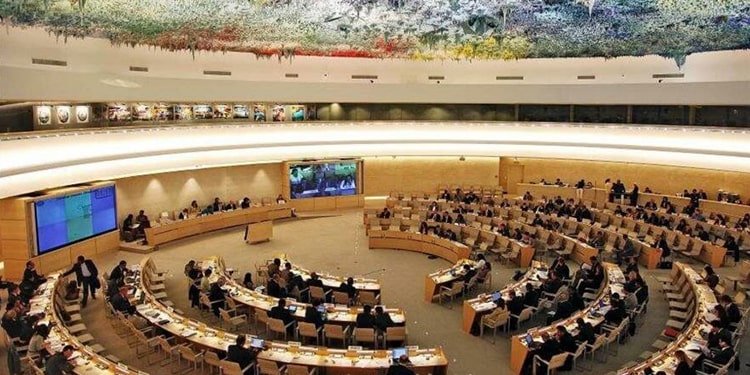 During the Universal Periodic Review (UPR) session of the UN Human Rights Council in Geneva, held on Friday, November 8, 2019, representatives of different countries urged the Iranian regime to join the Convention on the Elimination of All Forms of Discrimination Against Women (CEDAW) and avoid violating women’s rights.

The representatives of 33 countries to the Universal Periodic Review also urged the Iranian regime to adopt the international Convention on the Elimination of All Forms of Discrimination Against Women (CEDAW). They further called upon the regime to ban underage marriages, and lift restrictions on women’s dress code.

The U.S. representative called for the release of all prisoners of conscience and abolition of forced veiling. The representative of Iceland raised concern that Iran arrests women for campaigning against forced veiling. He said Iran must protect women’s rights, abolish the death penalty, abolish laws that discriminate against minorities, and criminalize domestic violence.

The representative of Italy said Iran must end its practice of the death penalty especially against minorities, end violence against women, raise marriage age for girls to 18, and guarantee freedom of expression.

Responding to the recommendations offered at the Universal Periodic Review session, Farideh Owlad Qobad, a member of parliament and member of the Iranian delegation, falsely claimed that Tehran had ratified a bill concerning the protection of women against violence.

But what is the truth?

The truth is that the VAW bill had been stuck for eight years being passed back and forth between the regime’s Judiciary and parliament. Finally, on September 17, 2019, the Iranian judiciary passed on a re-written and re-named bill to the government. So, it has not been passed to the parliament for adoption, yet.

The Iranian Judiciary not only changed the bill’s name to “Protection, Dignity and Provision of Security for Mesdames Against Violence,” but it changed the purpose and content of the bill.

A major deficiency in the new bill is replacing the word “women” with “Mesdames” which refers only to married women. Therefore, girls under 18, single women, victims of social ills and those subjected to such harms, are not covered by this bill.

Neither does the bill criminalize sexual harassment, rape, and sexual exploitation of women.

The bill also fails to offer any effective or sufficient guarantees to prevent or counter violence against women.

The bill has also turned a blind eye on the state-sponsored violence against women to enforce the compulsory veil, as the main systematic form of VAW.

The Iranian regime rejected 31 of the 56 recommendations it received in the last Universal Periodic Review (UPR) session regarding women’s rights, including those calling for joining the Convention on the Elimination of All Forms of Discrimination Against Women, raising the minimum age of marriage to 18 years and eliminating the practice of forced and early marriage, criminalizing domestic violence, and reforming discriminatory laws.

Iran has also failed to make progress regarding women’s rights, including to prevent and punish discrimination and violence against women, and enhance their participation in political decision-making processes.

Under Iran’s legal system women and girls, as young as nine years old, who are seen in public without a headscarf can be sentenced to prison, flogging or a cash fine. Millions of women and girls face daily harassment and abuse at the hands of state agents enforcing Iran’s strict Islamic dress code for women and girls.

Women are also discriminated against under the Civil Code, notably in matters relating to marriage, divorce, child custody and inheritance.