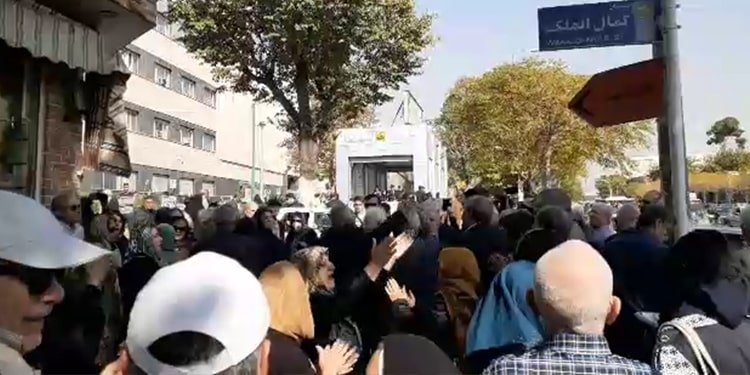 Retired teachers in Tehran and the people of Yazd, in central Iran held protests on Sunday.

Hundreds of retired teachers, including a remarkable number of women, held a protest gathering on Sunday, November 10, 2019, outside the mullahs’ parliament in Tehran.

Security forces and plainclothes agents attacked the protest gathering and made a number of arrests.

The gathering was held despite heavy presence of hundreds of security forces, motorcyclist units and dozens of plainclothes agents. The retired teachers gathered to protest their harsh living conditions.

Security forces had blocked all the roads leading to the parliament. Women leading the march chanted, “free imprisoned teachers,” “will not give up until we gain our demands” and “holding a protest gathering is our inalienable right.” Simultaneous with the gathering outside the parliament, another group of retired teachers gathered outside the Budget and Planning Organization. Security forces tried to prevent this gathering, as well.

Security forces arrested dozens of protesters. They confiscated cell phones of the protesters to prevent dissemination of photos and video clips from the gathering. At the time of publication of this news, it was not clear how many women have been arrested.

The Iranian Resistance urges the UN Human Rights Council and High Commissioner to take urgent action to secure the release of those arrested including the detained women.

In another act of protest in central Iran, the people of Yazd held a protest demonstration against Rouhani’s visit to their city. They chanted, “Rouhani answer for inflation and high prices.”

The people of Yazd also expressed their protest against false promises made by the mullahs’ president, calling him a liar.