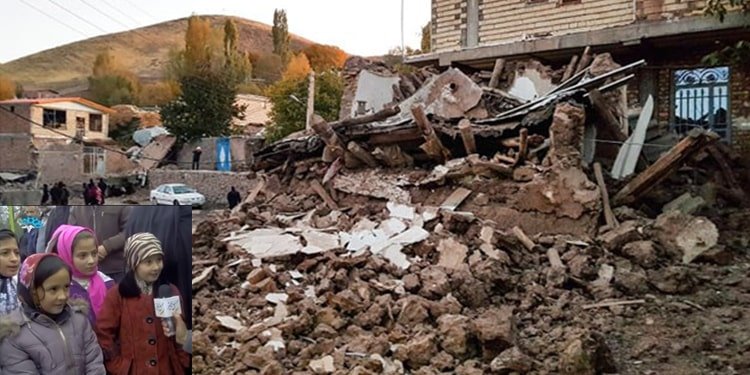 Ten-year-old Zahra Abedi was pulled alive from the ruins of her home in an earthquake-stricken village in northwest Iran but later died as timely medical treatment was not available.

At least five people including four women and girls were killed after a 5.9-magnitude earthquake struck northwestern Iran on Friday, November 8, 2019. Among them was the ten-year-old Zahra Abedi.

Asghar Abedi, Zahra’s father, described the night the earthquake occurred, “We had guests, and everyone was sleeping in our house. We were all terrified when the earthquake struck. I helped the guests get out of the house and I told Zahra to stay in a safe corner. But when I returned, the house had collapsed, and Zahra was trapped under the rubble. Immediately, we pulled her out from under the rubble. My daughter was unconscious, but she was breathing. I quickly took her to Chaldoran. The electricity was cut off there and no one could help Zahra. We could not save her. I brought my daughter’s dead body back to the village, bathed and buried her.” (The state-run Young Journalists Club – November 10, 2019)

Doctors come to Varankesh village in East Azerbaijan province two days a week. On the night of the earthquake, no doctor was in the village. So, Zahra’s father had to take her to the nearby town of Turkmanchay, but there was also a power outage and, consequently, Zahra died.

One of the villagers said, “If we had a doctor, maybe Zahra would still be alive with us today.”

Hundreds of the disaster-struck regions still do not have a proper shelter. Winter is approaching fast in these areas. Some 340 families live in Varankesh village and do not have suitable heating for the cold nights.

It was also reported that Kolivand, head of the Emergency Organization, announced that 60 percent of those injured in the earthquake were women. 27 percent of them were between 21 and 30 years old. (The state-run Young Journalists Club – November 9, 2019)

Lack of access to doctors and medical care is one of the major problems for women and girls in Iranian villages.

A magnitude 7 earthquake struck Kermanshah Province and other parts of western Iran in November 2017, killing more than 600 and injuring over 9,000 people. Many women and children lost their lives due to lack of timely access to hospitals.

After two years, many residents of Kermanshah Province are still living in makeshift homes. The Iranian regime has done almost nothing in the past two years to restore the residents’ housing, health and livelihood.

My deep condolences to the survivors of the earthquake in Azerbaijan, Zanjan, Gilan and Ardabil, and wishing for quick recovery of those injured. I urge the nation to rush to the aid of the victims of the earthquake. #Iran pic.twitter.com/pM7HxjrLUS