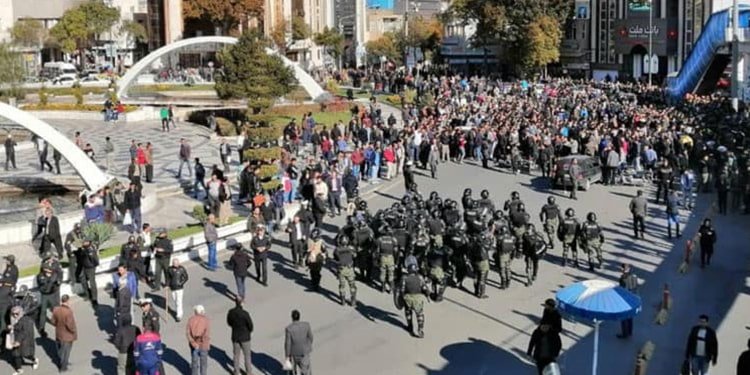 Sunday morning, November 17, 2019, the mullahs’ supreme leader Ali Khamenei personally weighed in and called the protesters, “villains.” He instructed “officials in charge of maintaining security” to “carry out their line of duties.” (Khamenei.ir website, November 17, 2019)

The clerical regime shut down the internet across Iran to prevent spread of the news and images of the protests and the regime’s crackdown on protesters.

The expeditious spread of Iran uprising forced the state and media to acknowledge the protests, and even the role of women in them, although they tried to minimize their dimensions.

The state-run Sharq daily newspaper, for example, wrote that the protests over fuel price hike continued since early hours of Saturday in various cities. The daily noted the presence of “masked women among protesters and popular protests.” With regards to the city of Rafsanjan, it wrote, “The leader of these gatherings were two young women and some men who encouraged people to chant and to join the gathering.” (The state-run Sharq daily, November 16, 2019)

So far, three people have died in Behbahan, one in Shiraz, one in Isfahan, one in Khorramshahr, one in Sirjan, and another in Karaj, at least eight persons in total who have been shot to death by repressive agents of the regime.

The Farsi website of Deutsche Welle, wrote about the spread of Iran protests, “Peaceful protests against tripling of the price of fuel escalated to new levels after some protesters were killed. The regime’s approach to the protests was more violent on the second day of the protests… In many cities, the protesters reacted to the violent and harsh treatment of the SSF and plainclothes agents by torching the police stations. For example, they torched a Bassij Base and a bank in Karaj. In Shiraz, protesters set fire to two gas stations and two police vehicles.”