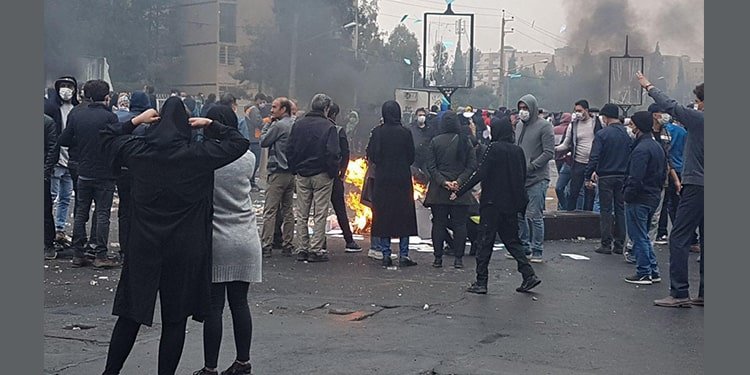 Three women were killed in Mahshahr and Shiraz.

On Tuesday, November 19, 2019, a young girl student was targeted by a State Security Force helicopter.

Iran protests continued for the fifth day on Tuesday despite extensive bloody crackdown by the clerical regime’s security forces who have been on full alert.

The Iranian regime’s State Security Force (SSF) and the IRGC as well as Intelligence Ministry and plainclothes agents are engaged in indiscriminate killing of people in various cities. They fire on any group of eight to ten people. At least 200 had been reported killed by Monday noon. More than 3,000 have been wounded .

At least 16 people were killed, 150 arrested and a large number wounded in the clashes which erupted in Mahshahr. Anti-riot forces fired with heavy machineguns on people who were headed for Mahshahr. Kureh and Jarrahi, two towns where the clashes broke out, are presently surrounded by heavily-armed forces.

With the deaths of three women in Mahshahr and Shiraz, the number of women killed during Iran protests reaches at least six. In Kermanshah (west) and Shiraz (south central), security forces attacked hospitals Monday night, taking away the bodies of those killed and the wounded protesters. In Kermanshah, authorities are demanding 500 million tomans ($38,000) to hand over the bodies of the dead. According to Kurdish sources, 300 Kurdish citizens have been arrested by security forces. A woman by the name of Paris Seifi, from Kamyaran, was among those arrested. Parisa was arrested in Sanandaj where she lives.

Brian Hook, the U.S. Special Representative for Iran and senior Policy Advisor to the U.S. Secretary of State, lambasted the Iranian regime for suppressing their people.

“This regime is murdering protesters, they are oppressing them, and they are resisting their demands for a better way of life. Iranian people know that it is a deeply hypocritical regime, it is a corrupt religious Mafia that has been stealing the wealth of the Iranian people for decades and spending it in Syria, Lebanon, Iraq, Yemen, Bahrain, Palestinian territories, bombing in Argentina, assassinations in Europe,” the U.S. special envoy noted.