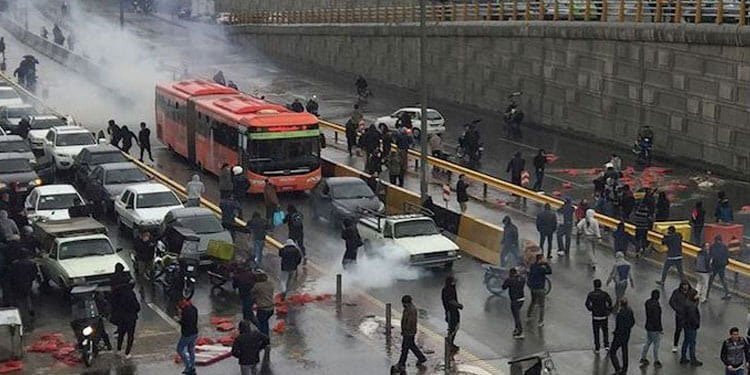 Three women have been arrested in Karaj for taking part in protests against increase in the price of gas, commander of the State Security Force (SSF) of Alborz Province announced.

Mohammadian said, “After the news of the rationing of fuel was announced, three people in Mohammad-shahr district of Karaj turned off their cars and held protests in the streets, chanting anti-government slogans.”

He claimed that the three women arrested in Karaj were “members of the initial team that instigated riots and destruction of public property in Mohammad-shahr district of Karaj.”

He said the popular protests were “illegal.”

Acknowledging that those arrested for participating in Iran protests in mid-November are badly dealt with and tortured, the SSF commander said, “Law (enforcement agents) will be harsh in dealing with these types of people who intend to disrupt public order. All those who are arrested for instigating insecurity in recent days, will be seriously dealt with by the police.” (The state-run Tasnim news agency – November 28, 2019)

The arbitrary arrests of civil activist women have also been intensified during the Iran uprising.

Raha Asgarizadeh, journalist, photographer and women’s rights activist, was arrested on Thursday, November 28, 2019, at Tehran’s airport on her way out of the country. In a brief call to her family, she informed them that she has been taken to Evin Prison.

Also in Ahvaz, Leila Shaverdi, was arrested on November 25, 2019, by security forces. She has been arrested for the activities of her brother, Nasser, who lives abroad. The Intelligence Department of Ahvaz announced that they would release her only if her brother abandons his activities in the media.

In another development, Mojgan Kavousi, a writer and researcher from Kelardasht, was arrested on Monday, November 18, 2019, by the Department of Intelligence of Kelardasht, in Mazandaran Province, northern Iran. No information is available on her fate.

Mojgan Kavousi had posted photos of those killed in the recent protests in Marivan and Javanroud using the hashtag #silence_is_treason.

Conditions of AIDS victims and women suffering from AIDS in Iran