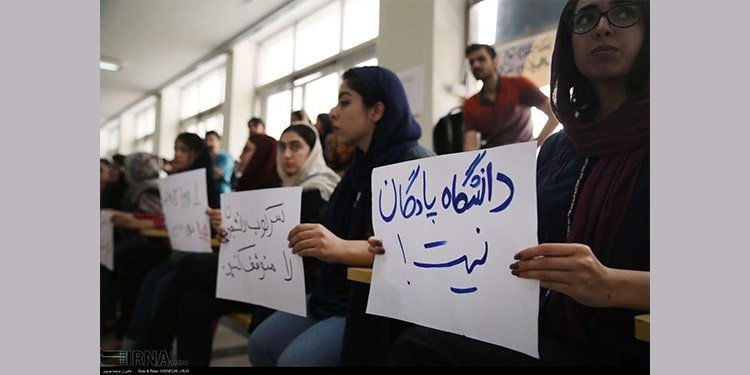 Iranian students pay homage to 1,000 martyrs of the Iran uprising on Student Day

Every year, December 7 marks the Student Day in Iran. It is the anniversary of the cold blooded murder of three defenseless Tehran University students on December 7, 1953, by the Iranian police.

The Student Day is observed every year by freedom-loving students in Iran to commemorate the students who have given their lives throughout the years for Iran’s freedom.

Ever since 1953, Tehran University and other universities have been considered as fortresses of freedom. Young Iranians educated in universities have always led the Iranian people’s democratic movement. Particularly under the Shah’s dictatorship, universities were the hub of anti-monarchical movement and virtually all leaders of opposition groups rose from universities.

Under the clerical regime, young women fight to overcome the numerous obstacles created under the law and in society to marginalize and deprive women of education. Over the years, Iranian girls have rowed upstream, making up virtually half of university admissions every year. As a result, young female university students in Iran are at the forefront of all anti-government protests, demanding their democratic rights.

Iranian students held a major uprising in 1999 which shook the earth underneath the mullahs for six days. Then, they widely participated in the 2009 uprising, in the December 2017-January 2018 uprising, and finally in the nationwide uprising of November 2019.

Despite massive repression and control in universities, last year saw some major protests by Iranian students, and young women studying at various universities have always been an indispensable part of these protests. On the eve of the Student Day in Iran on December 7, we will briefly review some of these major protests.

Hundreds of students of Tehran University held a major protest on May 13, 2019, against renewed efforts to enforce strict compulsory veiling rules on female students.

Since a week before, female paramilitary Bassij members had been stationed all across the campus reinforcing the security forces, to harass female students over their clothes and head coverings and enforce the compulsory veil through cracking down on female students.

Young women of Tehran University extensively and actively participated in the protest. The protesting students then gathered in the auditorium of the School of Fine Arts, demanding the president and vice president to answer. In response, Bassij forces attacked and brutalized the students.

On subsequent days, the students of the universities across Iran also held protests in solidarity with Tehran University students saying that Bassij and the misogynous plans of Bassij have no place in universities.

Protests against Rouhani and heavy sentences issued for students

On October 16, 2019, Tehran University students held a protest against Rouhani’s presence at Tehran University. They spoke out against heavy prison sentences issued for student activists and depriving them of continuing their education.

Tehran University students declared that more than 100 years of jail sentences had been issued for student activists arrested in the December 2017-January 2018 uprising.

Leila Hosseinzadeh, a master’s student of Anthropology and secretary of the central council of students at Tehran University, sentenced to 2.5 years in prison and banned from leaving the country for two years;

Marzieh Amiri, a journalist and Tehran University student of sociology, sentenced to 10 years and 6 months in prison and 148 lashes;

Parisa Rafii, 23, a student of art at Tehran University, sentenced to 7 years in prison, 74 lashes, and 2 years ban on leaving the country.

This was not the only protest held by Iranian students. Dozens of similar protests were held throughout the year in universities all across the country against heavy sentences for students, depriving them of continuing their education.

The National Students Council issued a statement on July 27, 2019, in this regard, declaring that Iranian students will never remain silent against such measures by the clerical regime.

Students in Tehran and other provinces joined the nationwide uprising in November 2019.

Tehran University students held a gathering on November 18, intending to join with other students from Amir Kabir University and Azad universities of Tehran, to participate in the uprising. But they were surrounded by the Revolutionary Guards and not allowed to leave the university.

After the sunset and in the dark of the night, plainclothes agents drove ambulances into the campus. They pushed the students into the ambulances and took them away.

Regime officials have admitted that at least 95 students have been arrested during the protests. (The state-run ILNA news agency, December 5, 2019) Dozens of young women were among those arrested, including Soha Mortezaii who had held 10 days of a sit-in on campus to protest being deprived of continuing her education for Ph.D.

Nevertheless, Iranian students have not stopped their protests.

They have held a number of ceremonies to observe the Student Day honoring those who were killed during the Iran uprising in November 2019. These ceremonies have been held in the Medical Sciences University of Tabriz, Allameh University of Tehran, the University of Zanjan and many other universities across the country.