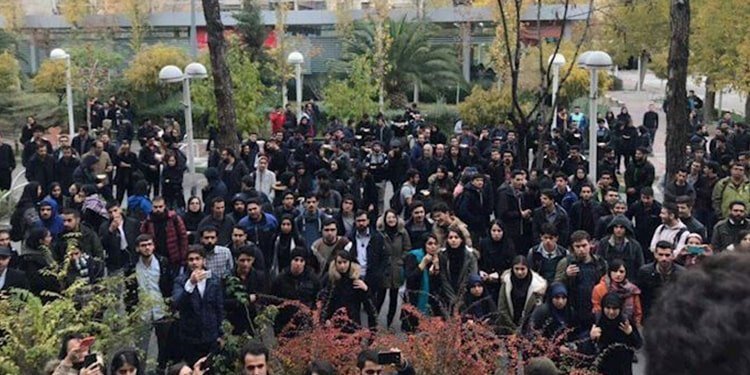 Iranian students observe the Student Day every year to show that universities remain a fortress for freedom. This year, too, they reiterated that the uprising is going to continue by commemorating more than 1,000 people who were martyred in the Iran uprising in mid-November.

In Tehran, students of Tehran University, Amir Kabir University, Allameh Tabatabaii University, and the Teachers Training University among others commemorated the Student Day by gathering on their campuses. The students of Tehran University held a gathering despite heavy security measures due to the presence of Judiciary Chief Ebrahim Ra’isi on their campus. They held placards and protested the heavy security atmosphere. They chanted, “(despite) jail, guns, batons, we will not remain silent,” “the nation is fed up with oppression and are standing side by side,” “your repression is not going to work, we live to resist,” “classrooms are empty, students are in prison.”

Students of the Tehran University’s School of Art gathered around a symbolic grave, commemorating “those killed but not buried.” They chanted, “Free all imprisoned students.”

Students of Amir Kabir University commemorated the martyrs of the Iran Uprising by chants of, “My martyred brother, we will continue your path.” Amir Kabir students marched on campus and sang anthems of solidarity. They also chanted, “students die but will not succumb,” “poverty, corruption, high prices, and imprisoned students,” and “a nation united will never be defeated.”

To prevent Student Day ceremonies and protests, the clerical regime had stationed a large number of security forces in front of Tehran University and its surrounding streets.

Student Day in other cities

In Babol, the students of Noshirvani Industrial University declared that they will have two days of ceremonies to observe the Student Day.

Female students were actively present in all these ceremonies and protest gatherings.

In another act of protest, students of the University of Isfahan, Azad University of Najafabad, and the Applied Sciences University of Mashhad issued a joint statement on the occasion of December 7, the Student Day.

In part of their statement, they declared:

While reiterating our demand for the release of all students arrested and detained during the protests in mid-November, we explicitly declare:

We declare that through our organized, extensive and radical presence we are going to be the best political force in universities. We declare our solidarity with the movements of women, workers and the ongoing struggles in society.