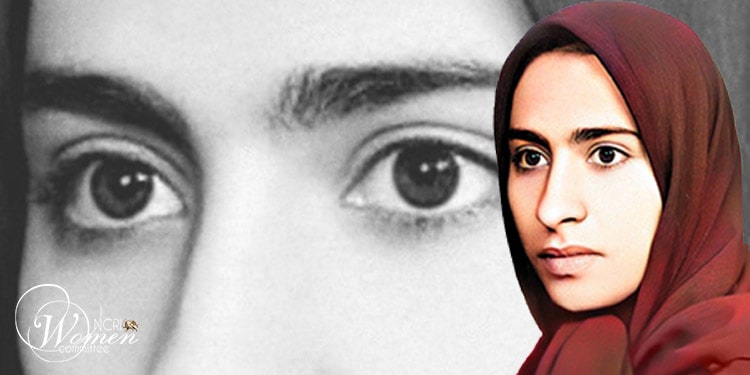 Azam Nassabi was born in Kermanshah in 1960. She completed her primary and secondary education in Kermanshah. The last year of her high school coincided with Iran’s anti-dictatorial revolution of 1979.

Azam was very curious and active, and had a dynamic mind and character. Many of her discussions with her father, relatives, and others around her were about social issues. A lot of her questions started with “why.”

She always set conscious objectives and focused all her efforts on achieving it.

Azam was active and would not easily submit to the unwritten repressive rules for women.

She chose livestock and farm studies for her college education at the Kermanshah University. She later had to change her major to biology because the mullahs declared that her first major was only for men. University life provided Azam an opportunity to be socially active, join other youth organizations, and fight for basic freedoms. That’s where she became acquainted with the PMOI/MEK. That acquaintance marked the beginning of her political activities and facing many new challenges.

According to Azam’s sister, “Given the social traditions of that time, engaging in political activities was not easy for Azam. Our mother was opposed to her activities. Azam would ask me, `When you arrive home early, if mom is at home, leave a piece of wood under the door so I know she is at home and be ready to respond to her questions.’ Azam had high courage to face new challenges and was creative is dealing with them.”

Azam Nassabi was arrested in the second half of 1981 by the Revolutionary Guards. She was tortured for two years and was in solitary confinement at the infamous Dizelabad Prison in Kermanshah. After release from prison, and despite imprisonment and torture, she decided to be more active and step up her fight against the religious dictatorship.

She was arrested again in 1986 with her younger sister, Nayyer. The two sisters were imprisoned in Dizelabad Prison in Kermanshah.

Nayyer recounts, “We were held in the right-hand cells in the corridor with 30 other political prisoners. Azam was tortured severely. Her toes were swollen and bruised and she was unable to walk. But with her courage and high spirit, she would give hope and determination to the rest of the inmates. Because of her high spirits, other political prisoners liked and respected her very much. Although she was in a lot of physical pain, she would take care of other tortured prisoners. When our mother brought us pistachios, almonds, etc., she packed them in small bags and placed under the bed of cellmates who did not have a visitor.”

Nayyer continues, “One day, when we were sitting on the bed, I asked her to make a wish! And Azam said, `I would like to join the Mojahedin at Camp Ashraf.” A wish, which of course was never realized for Azam, but her younger sister was able to achieve and to continue Azam’s path toward freedom.

Other cellmates have recounted that the last time Azam Nassabi was interrogated, the interrogator told her, “This is the end of the line for you. You are the leader of this group and we want to get rid of all of you. You should have been executed in 1986. Write your last will.”

Azam Nassabi was executed on August 27, 1988, in Gohardasht Prison in Karaj.

Azam’s younger sister describes her feelings once she heard about Azam’s martyrdom.

“I had left Iran and had joined the Mojahedin (PMOI/MEK) at Camp Ashraf. I was in contact with my mother. One day I received a letter from our mom that said, ‘we light a candle every night in memory of Azam.’ My tears rolled down uncontrolled and images of my dear sister Azam kept crossing my mind. My sister became a star and joined the galaxy of martyrs who gave their lives for freedom.”

“It has been 30 years since Azam left us, but she has been a star who lights our path toward freedom. I get strength and warmth from her. Without a doubt, I will see her again, when our people gain their freedom; she will be among them smiling and singing.”