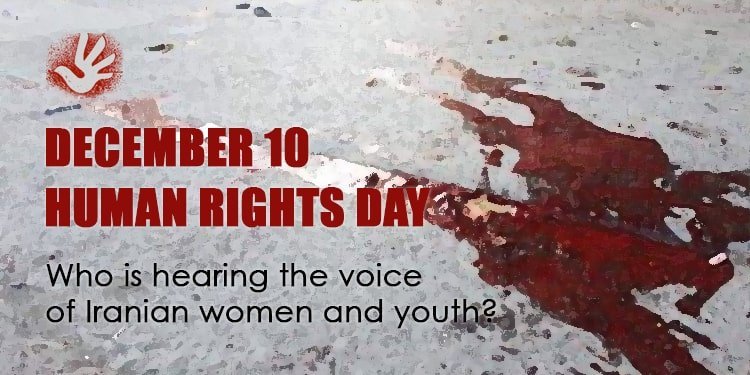 On the Human Rights Day, who is hearing the cries of Iran’s youth?

The Human Rights Day, the anniversary of the adoption of the Universal Declaration of Human Rights on December 10, 1948, and this year’s theme focusing on the role of youth in standing up for human rights, is an opportune moment to speak up for the unarmed and defenseless young people of Iran who are being massacred by the clerical regime, for protesting 40 years of their corrupt rule.

As the details of the slaughters are trickling out after days of total shutdown of the internet in Iran, we hear of horrific crimes committed against humanity. As the UN High Commissioner for Human Rights put it, “the picture now emerging from Iran is extremely disturbing.”

A pregnant mother of a 7-year-old son who is shot in the head by a sniper for stopping to help an injured man fallen on the ground.

A young man shot by three plainclothes agents at point blank range, falls on the ground and another agent hits him in the head with an ax.

A teenage girl, 14, is hit in the head in a street in downtown Tehran.

A pregnant woman is shot to death in Saveh, and a 34-year-old mother of three children is hit in the head from behind as she bends down to help a wounded young man.

A young woman was tortured to death in Abadan and her lifeless body abandoned outside the residence of her father.

People hiding in marshlands of Mahshahr to escape security forces, are sprayed with machineguns and at least 100 people including women and children are killed.

A 59-year-old mother of six is hit with bullets as she was watching the protests from the rooftop of her home.

A report from Marivan Prison in the Iranian Kurdistan said a woman was killed under torture. There are more reports indicating that prisoners are viciously tortured to death.

The majority of those killed were young people including dozens under 18 years of age. One of the most horrific crimes of the 21st Centurty

The UN High Commissioner for Human Rights said Iranian security forces were “shooting to kill” unarmed protesters, targeting from behind or from the roof of government buildings. Michelle Bachelet confirmed that “these are clear violations of international norms and standards on the use of force, and serious violations of human rights.” She described the excessive use of force by the Iranian regime as “indiscriminate, horrifying and deadly reaction by the security forces.”

It is estimated that more than 1,000 people have been killed during the protests that started in mid-November in Iran. Over 4,000 have been wounded and some 12,000 have been arrested.

The deaths of at least 25 women have been corroborated. They include elderly and middle-aged women, two pregnant women and three teenagers, three mothers with young children and a nurse, a female head of household.

The crimes committed by the regime and the horrendous mass killings are one of the most horrific crimes of the 21st century.

The world must act to stop the killings and torture

This is while Iranian protesters have done nothing wrong. They have done what is mentioned in the preamble to the Universal Declaration of Human Rights, namely, they have taken recourse “as a last resort, to rebellion against tyranny and oppression.”

The world remained silent in 1988, when the massacre of 30,000 political prisoners in Iran was taking place. Appeals to stop the genocide fell on deaf ears and the perpetrators of the massacre escaped prosecution or any form of accountability.

After 31 years, it is time for the world community to respond properly to the crimes against humanity committed by Iran rulers, the same officials who carried out the 1988 massacre. The world must end this impunity. The UN Security Council must declare the leaders of the clerical regime in Iran, including the mullahs’ supreme leader Ali Khamenei, their president Hassan Rouhani and the head of Judiciary, Ebrahim Ra’isi, as criminals who have committed crimes against humanity and they must face justice.

The UN must immediately dispatch fact-finding missions to Iran to stop the killings and torture, and to investigate the circumstances of death, injury and detention of Iranian protesters. Any silence and inaction on the ongoing carnage in Iran is interpreted by Tehran rulers as a green light to continue and step up their atrocities against the people of Iran and especially the young people who want regime change and can no longer tolerate the conditions under the rule of the mullahs. They want to enjoy their basic human rights. The right to life, to education, to freedom of speech, thoughts and opinion, and to “a standard of living adequate for the health and well-being of himself and of his family, including food, clothing, housing and medical care and necessary social services.”

The world must hear the voice of the people of Iran, the women of Iran and the young people who are being slaughtered in the thousands. The world must stand with them and recognize their right “as a last resort, to rebellion against tyranny and oppression.”

Damona Ta'avoni: The only prisoner who didn't have a blindfold was me!