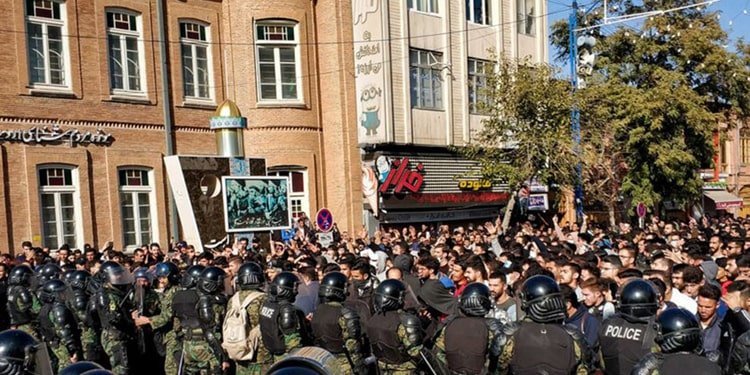 Evidence of crimes against humanity during Iran protests in November

More information is leaking out every day about the massacre of defenseless people in Iran during the protests in November and the crimes committed against humanity. A clerical regime’s official spoke out about the killing of a nurse at a hospital as she was standing by the window.

Mohammad Javad Baqeri, the Friday Prayer leader of the city of Asalem in Gilan Province and representative of the mullahs’ supreme leader in this city, revealed that at one of Tehran hospitals, an innocent nurse was directly shot in the forehead as she was watching the protests from a window and attempted to shoot films.

In his sermon at the Friday prayer on December 6, 2019, Baqeri brazenly said, “They don’t give you candies amidst the fight and clashes. There are bullets. Someone was telling me last night that (in one of the early days of the protests) he was in a busy hospital in Tehran. A female nurse went to the window. She said she wanted to take films (from the protests). As she was attempting to take a film from the protests outside, a bullet struck her right in the middle of her forehead!”

By narrating such stories, the clerical regime officials are seeking to terrify people who shoot films from the scenes of crimes committed by their security forces. They thus want to prevent leaking of information and news abroad.

This admission, however, indicates “crime against humanity” as the regime deployed snipers to shoot to kill innocent and defenseless citizens who even did not participate in the protests. Otherwise, how could a bullet target someone behind the window of a hospital “right in the middle of her forehead?”

Previously, there were reports of Ms. Mina Sheikhi, 59 and mother of six, who was struck in the heart by a bullet as she was watching the protests from the rooftop of her house.

The same was true about another three women killed during the protests. Ameneh Shahbazifard, 38 and mother of three, Azar Mirzapour Zahabi, 48 and mother of four, and Golnaz Samsami, pregnant and mother of a 7-year-old son, were shot in the head or chest, and from behind by a sniper, as they were passing by or were helping someone injured.

“These are clear violations of international norms and standards on the use of force, and serious violations of human rights,” as indicated by the UN High Commissioner for Human Rights, Michele Bachelet. And the world must take urgent action to stop them.

There were also admissions and reports on more arbitrary arrests by the regime.

Mehdi Tajik, Chief of Tehran’s Security Police, announced the identification and arrest of a woman in Karaj. (The state-run ROKNA news agency – December 4, 2019)

Other news indicated the arbitrary arrest of Azam Shirafkan, 48 and mother of three, on November 18, 2019. She has been taken to an unknown location and there is no information available on her. Reports also indicated the arbitrary arrests of Mahin Razzaq in Ilam, Fatemeh Davand in Bukan, Yas Soleimani in Shushtar, Sahar Avazzadeh daughter of Yaqub, Sahar Avazzadeh daughter of Hossein, and Soudeh Jafarizadeh in Gachsaran during the initial days of the protests. Eyewitnesses say most of these arrests have been accompanied by brutality of IRGC and Bassij forces.

99th woman hanged with husband in the Central Prison of Mashhad