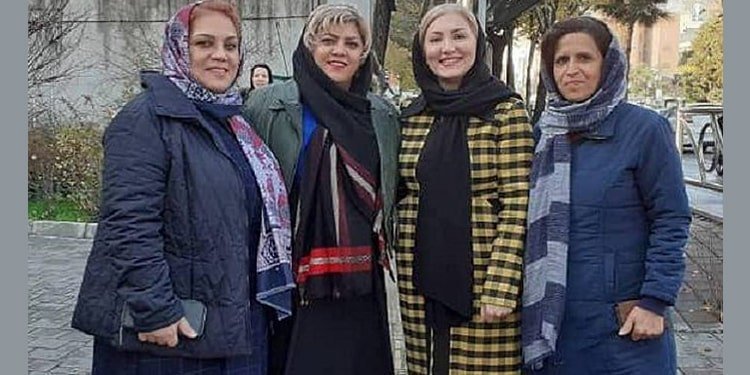 Four women’s rights activists have been sentenced to 16 years and 8 months in prison.

Nahid Shaqaqi, Akram Nasirian, Maryam Mohammadi, and Esrin Derkaleh, members of the Voice of Iran Women’s Association have each been sentenced to 4 years and 2 months in prison. The lawyers of the four women’s rights activists were informed of their sentences on Wednesday, December 11, 2019. Their charges included disseminating propaganda against the state, removing the veil, and conspiring against national security.

Esrin Derkaleh is 58 years old and has an 18-year-old child.

Ms. Akram Nassirian has been active in the literacy movement and in sending relief to flood victims.

Nahid Shaqaqi was arrested in May and detained in the Intelligence Ministry Ward 209 for several weeks before being released on bail.

At the same time, the 36th Branch of Tehran’s Revision Court issued a sentence of 4 years and five months for civil activist Rezvaneh Ahmad Khanbeigi who has been imprisoned since November 17 in Ward 2A of Evin Prison.

In another development, Zohreh Sayyadi, was arrested at her home in Andisheh Township of Tehran, on Tuesday, December 10, 2019. No information is available on the reason for her arrest or her charges. Her activities concerned children without birth certificates, teaching child laborers, helping women heads of household and conservation of environment.

In another report from Evin Prison, Ms. Monireh Arabshahi was prevented from going to an outside hospital to receive her needed special treatment despite prescription of doctors, because she refused to wear the prison garb, the handcuffs and shackles in order to be transferred to hospital.