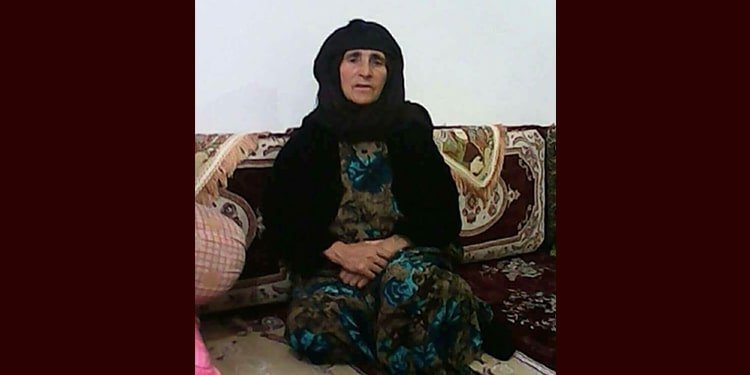 Sherafat Zarrini renowned as Dayeh Sharifeh dedicated her Peace and Reconciliation Award to mothers of all the martyrs of the Iran Uprising in November 2019.

Dayeh Sahrifeh is mother of Kurdish political prisoner Ramin Hossein Panahi who was executed last year in September by the clerical regime.

The Peace Charity Organization, an official organization based in the Iraqi Kurdistan Authority and also in Geneva, granted its award to Dayeh Sharifeh for her active efforts to abolish the death penalty in Iran and her active participation in the Clemency Campaign of Kurdistan.

Mrs. Sherafat Zarrini renowned as Dayeh Sharifeh whose passport has been confiscated by the Iranian Intelligence Ministry was not able to attend the ceremony to receive her award. So, her other son, Amjad Hossein Panahi, received the award instead of her mother. In a message on behalf of his mother, he announced that she dedicates her award to all the mothers who have lost their children in the Iran Uprising in November 2019.

In another development, Laleh Park mothers issued a statement elaborating on the November protests in Iran. In part of their statement, they wrote, “There are no bright spots in the record of Iran’s ruling thugs who are engulfed in corruption. They are well aware of the people’s deep-seated detestation towards them.” The Laleh Park mothers also denounced the killings and suppression of protesters and wrote, “The regime’s security forces were most vicious in dealing with people. Every moment, we keep hearing of the murder, wounding and arrest of protesters.”

The Laleh Park mothers call for unconditional release of all prisoners and abolition of the law on torture and the death penalty.