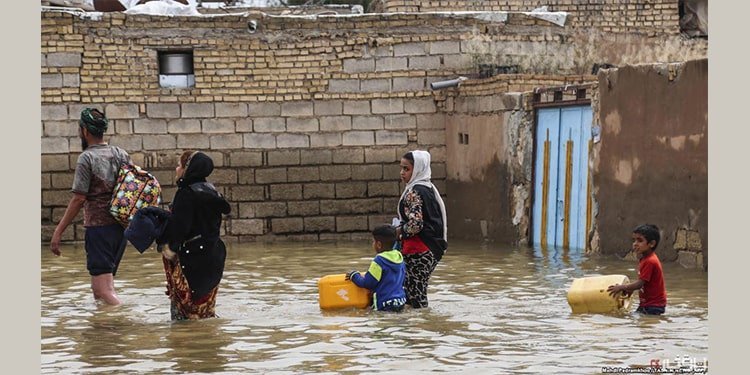 The floods in Khuzestan, Fars and Bushehr amidst all the problems of livelihoods and the crisis of air pollution in Iran, have again caused the residents of these provinces to face irreparable catastrophes. The deprived women in these areas are the first victims of the disaster. In Ahvaz, the Hasirabad and Naderi districts are barricaded from the floods. In Kut Abdullah in Ahvaz, sewage spills have made the life of 50,000 people unbearable. Various diseases threaten the deprived population of this area, especially women and children.

In an interview with the state-run news agency ILNA, the Governor of Khuzestan confessed to the death of the four elderly women and said, “The hospital’s electricity was cut off by lightning.” However, he did not say why the hospital’s emergency power systems did not work properly which caused the incident. Government officials have so far taken no action for the people in the flooded areas, each shifting the responsibility to another department. “There must be a system for collecting surface water,” the Governor of Khuzestan said, “These systems should have been in installed in Ahvaz many years ago, but it has not been done!” (The state-run ILNA news agency, December 17, 2019)

Mrs. Maryam Rajavi, President-elect of the National Council of Resistance of Iran, expressed her heart-felt condolences to the people of these provinces and the families of the victims. Mrs. Rajavi emphasized, “Iran’s wealth is being plundered by the ruling mullahs and spent on terrorism, belligerence and anti-patriotic missile and nuclear programs, leaving our people defenseless in the face of natural disasters.”