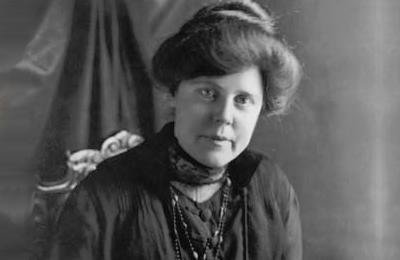 Mukhopadhyaya was the wife and spiritual counterpart of Ramakrishna Paramahamsa, a nineteenth century mystic of Bengal. Sarad Devi is also reverentially addressed as the Holy Mother. Sarada Devi played an important role in the growth of the Ramakrishna Movement.

Lucy Burns (July 28, 1879 – December 22, 1966) was born in New York to an Irish Catholic family. She was so inspired by their activism and charisma that she dropped her graduate studies to stay with them and work in the Women’s Social and Political Union, an organization dedicated to fighting for women’s rights in the United Kingdom. While working with the WSPU, Lucy Burns met Alice Paul at a London police station. Both women had been arrested for demonstrating, and Alice Paul introduced herself when she noticed that Lucy Burns was wearing an American flag pin on her lapel.

Burns was the first woman to speak before the Congressional delegates in 1914 when the Anthony amendment finally made it out of committee and into the House. Burns and other suffragists had been told by the chairman of the House Committee on Suffrage that the House would not pass a suffrage amendment before 1920. To their surprise, it was announced in late 1917 that the House would make a decision on January 10, 1918. She died on December 22, 1966 in Brooklyn, New York.