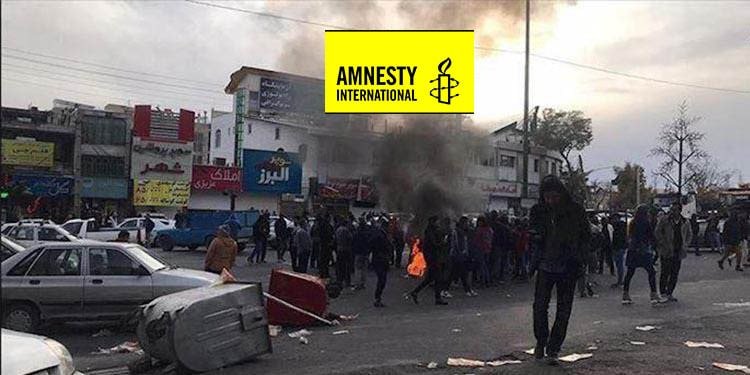 Amnesty International calls for release of prisoners in November uprising

Amnesty International issued a public call for the release of arbitrary detainees during the November uprising in Iran.

On December 28, 2019, Amnesty International warned against the possibility of torture and ill-treatment of detained protesters in Iran and issued a public call for the release of those arbitrarily detained.

Amnesty International said, “The authorities have arrested thousands of protesters as well as journalists, students and human rights defenders to stop them from speaking out about Iran’s ruthless repression. Children as young as 15 have been arrested and detained alongside adults in prisons notorious for torture. Detainees have been subjected to torture and other ill-treatment; they have been beaten, punched, kicked and flogged by security forces. Many are being denied access to their families and lawyers.”

The Iranian Resistance had previously announced the number of those killed is much higher than 1,500 which is a conservative estimate. On Monday, December 23, 2019, Reuters reported that 1,500 people were killed in Iran during less than two weeks of unrest that started on November 15, including about 400 women and 17 teenagers.

Amnesty International’s call was issued as arbitrary arrests are being made on a daily basis in Iran.

In one instance, the Gilan provincial police commander announced that 4 people who allegedly provoked the protests had been detained in Rasht. A 31-year-old woman is among those detained. (The state-run Tasnim News Agency – December 26, 2019)

Also, at a ceremony in commemoration of Navid Behboudi, one of the martyrs of the November uprising, three women were arrested in a village in Sowme’eh Sara, Gilan Province. The three women rights activists, Mahrokh Rousta, Jelveh Javaheri, and Forough Samei-Nia, are still in custody and have been denied their release.

Increasing pressure on women political prisoners in Evin and Qarchak