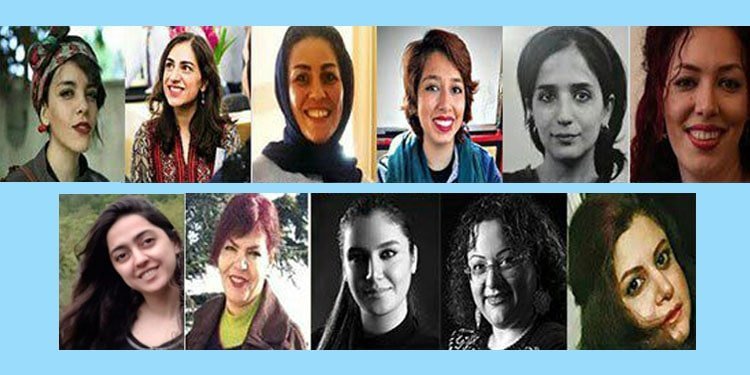 The letter of the 12 female political prisoners reads:

“From December 21, 2019, to December 26, 2019, a group of our inmates held a sit-in protest in Evin Prison Political Bureau for the occasion of the 40th day anniversary of the November protesters’ death. However, their peaceful protest was unfortunately met with harsh treatment and suppression by prison authorities. Ms. Narges Mohammadi was taken from her cell with the excuse of meeting her lawyer, and then security forces transferred her to Zanjan Prison under the order of prison authorities. According to prison authorities, Atena Daemi was transferred to Ward 2A of Evin Prison on December 26, 2019. We, a group of political prisoners of conscience in the Women’s Ward of Evin Prison, are concerned about the situation of our fellow inmates and express our protest against the exile, transfer and other similar treatment towards political prisoners and call for the return of our inmates.”

The names of the signatories are as follows:

In another development, no information is available on Atena Daemi’s situation since the transfer of the political prisoner to the IRGC Intelligence Detention Center, known as Ward 2A. Her family has also been shuffled between various departments and has so far received no response concerning their child. Atena Daemi announced during a phone call to her family on December 31, 2019, that she was being transferred to Ward 2A in Evin Prison. Atena’s condition is dire and her doctor had requested immediate and emergency hospitalization. Her father said, ” Instead of the hospital, they transferred my daughter to solitary confinement.”

Labor activist Parvin Mohammadi was taken to a hospital outside prison with handcuffs and returned to prison without medical examination. Parvin Mohammadi slipped on the icy floor on her way to the prison workshop on January 3, 2020, and suffered head injuries, blurred vision and headaches.

Also, on January 4, 2020, Anisha Assadollahi, a female labor activist arrested on the International Labor Day, was once again summoned to the Prosecutor’s Office in Evin Prison and transferred to Evin Prison.

A women’s rights activist, Zohreh Asadpour was also arrested by security forces in Rasht on January 4, 2020.

Shortage of nurses - Critical lack of 150,000 nurses in Iran