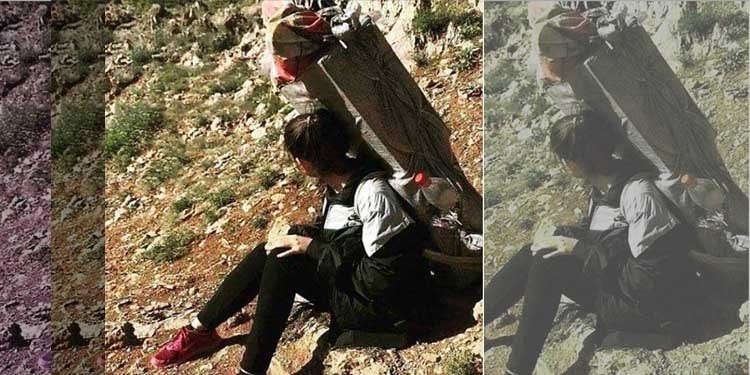 Women porters carrying the burden of livelihood on their backs

Iranian women porters in the border regions of Kurdistan, Kermanshah, and West Azerbaijan provinces face a painful reality in their lives working as border porters (kulbars) by appearing in men’s clothes along with their husbands or sometimes working instead of them.

Kulbar (Porter) is not legitimately defined as a qualified job in Iran, therefore a person who works as a porter has no legal support. At the 23rd General Provincial Council Assembly, Halaleh Amini, a member of the mullahs’ parliament, revealed the grave situation of women porters. She stated, “We should cry bloodied tears and it is unfortunate to say that we face with girls and women who have to appear as a man or a boy to join the long line of the border porters.” (The state-run Tasnim news agency- October 10, 2019)

Below are just a few examples of the large number of women heads of household who are forced to turn to hard jobs and work as women porters (Kulbars):

Amineh, 60, a woman head of household from a village in Kermanshah, said that she has been working as a porter ever since she was 26 years old. She explained: “It was at the time when my husband had just passed away and it was very difficult for me to feed my four children. I was in a very bad situation. Therefore, once with a friend of mine, we bought 80 kilos of diesel and set out to carry it on a path which was full of land mines.”

Another woman head of household who is a mother of three explained about the harsh conditions she faces as a woman porter, “If we get arrested, our cargo will be seized. Every time I go and come, I only receive between 50-100 thousand tomans ($11-$22).”

“Most of the times, we have to hide in the cold and blizzard winter or under the hot sun, behind rocks for long hours in fear of ambushes or traps laid by Revolutionary Guards (IRGC). Many of the traffickers don’t give their cargo to women and if they ever do, they’ll pay them less than men.”

Border porter (Kulbar) is one of the toughest jobs under the mullahs’ regime, but a wide range of people who are struggling with poverty inevitably turn to it.

In July 2019, Javaid Rehman, the UN Special Rapporteur on the human rights situation in Iran, wrote in his report about Iran’s Kulbars (Border Porters) to the United Nations: “In 2018, according to obtained information, 75 border porters were killed and 177 were wounded. Among them, 42 were victims of direct gunfire by security forces, and 66 fell from mountains after being chased by security forces. In total, 14 people either lost their lives or their legs in the cold, and 4 were injured in mine explosions. It has been reported that in the first six months of 2019, at least 42 border porters were killed and 74 were injured.”

A glance at the horrible living conditions of women in Varnakesh