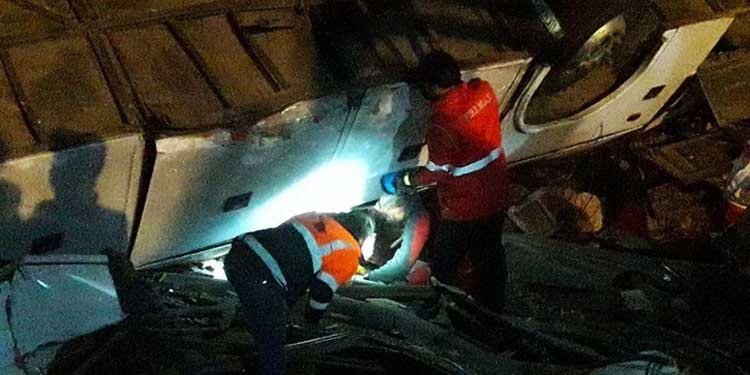 Roof collapses on girls in a girls' school in Hormozgan Province.

In a vehicle accident overturning a passenger bus on the Tehran road to Gonbad, 9 women die along with an unborn child.

The bus collided into a traffic barrier due to a technical problem in its brake and was thrown into a deep slope. In this painful incident, in addition to the 9 women and 1 unborn child who died, 8 other women were injured. (The state-run IRNA news agency – January 9, 2020)

The accident occurred on the Tehran – Ghaemshahr road. Apart from the mismanagement and the theft and seizure of Iran’s national wealth by government agents, in investigating the causes of accidents in Iran ruled by the mullahs, many domestic and international road and transport experts pinpoint the lack of standard roads and transport infrastructure, the existence of worn-out and sometimes out-of-date vehicles, the lack of safety signs on the country’s roads, population growth and rising car statistics, and poverty and economic pressures on drivers.

With 800,000 road accidents per year (one and a half times the global average), Iran has the highest annual fatality rate in traffic incidents the world.

Roof collapses in girls’ elementary school in a village in Minab On January 4, 2020, a roof collapsed in a girls’ elementary school in Raveng village in Minab, while the girls were in the classrooms.

The incident frightened the girls, leaving them traumatized and crying. (The state-run IRNA news agency – January 5, 2020)

This girls’ elementary school, built since 1969, has been facing Infrastructure deterioration. More than 150 students are studying in the school. So far, no action has been taken to renovate the deteriorating school.

There are 670 non-standard and damaged schools in Hormozgan Province, with 90,000 students studying in these schools.