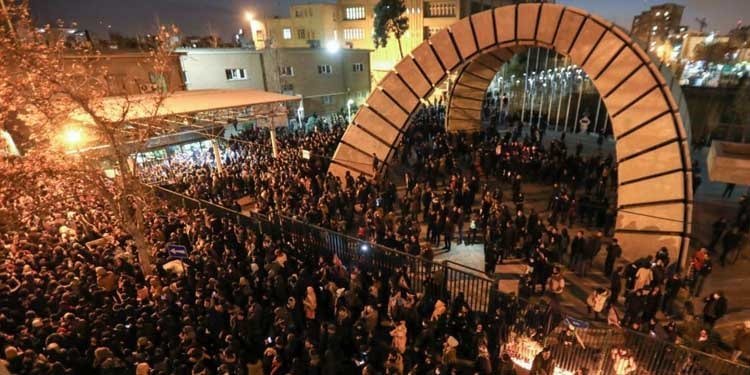 A number of students have been arrested, several women are among those wounded

The third day of protests by Iranian people and students continued on Monday, January 13, 2020 in Tehran and other cities. Brave women and female students of Iran have been actively and widely participating in the new wave of protests against the mullahs’ supreme leader which has already spread to 19 provinces.

Sunday evening, January 12, 2020, Iranian people and youth gathered in Azadi Square, Enqelab Square and the roads and avenues leading to them. In Qods City, women tore down a poster of Qassem Soleimani and set it on fire.

Sunday night, security forces received orders from their supreme leader, Ali Khamenei, to use batons and tear gas against protesters and fire at them. They also brought in water cannons and vehicles equipped with 50 caliber machine guns to confront and disperse the protesters.

A number of protesters were wounded in the crackdown on the protests. Clips posted on the internet show several young women shot by security forces in Azadi Square and nearby streets.

A woman wounded at Ostad Mo'ein Ave. in Tehran Sunday night.
Reports say that she was targeted and shot by plainclothes agents.#IranProtests2020 #FreeIran2020 pic.twitter.com/vp5E8vVv3e

Two wounded women are in Azadi Ave. near Azadi Square Sunday night.
The use of force and killings of protesters by the Iranian regime’s agents and forces must be condemned firmly by @francediplo_EN @un @JosepBorrellF @eu_eeas @GermanyDiplo @foreignoffice pic.twitter.com/cyd86BS8l9

A large number of students and protesters have also been arrested in Tehran, Karaj, Mashhad, Zanjan, Babol, Rasht, Gorgan, Tabriz, Kermanshah and Kashan.

Despite such massive clampdown, students of Sharif Industrial University continued their third day of protests on Monday, January 13, 2020 with chants of “death to the dictator.” They expressed their detestation of the ruling clerical regime.

Mrs. Maryam Rajavi, the President-elect of the National Council of Resistance of Iran, hailed the arisen people of Iran and said, “The time has come for the world community to acknowledge the truth that the ruling religious fascism does not represent the Iranian people and to recognize the national demand of the Iranian people to overthrow this regime.”