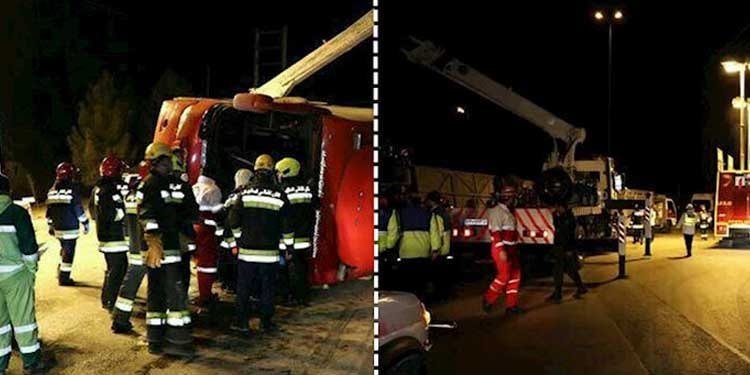 A bus accident on Tehran- Shiraz Road led to the deaths of nine passengers including five women.

Sixteen (16) women including a pregnant woman died in four bus accidents in various parts of Iran from January 9 to 20, 2020.

According to the state-run media in Iran, every half an hour, one Iranian woman loses her husband or father due to road accidents.

Experts say addiction, prostitution, divorce, street children and child labor are some of the consequences of road accidents affecting women and children. (The state-run salamatnews.com -January 25, 2020)

In investigating the causes of increase in road accidents in Iran, many domestic and international experts believe that the lack of standard roads and traffic infrastructures, worn-out and sometimes out-of-date vehicles, lack of traffic signs on the roads, population growth and rising number of cars, poverty and economic pressure on drivers are among the causes of road accidents in Iran. This is in addition to mismanagement by a kleptocratic regime.

Iran ranks the world’s number one with the highest death toll, in 800,000 road accidents per year (1.5 times the world average).

In terms of casualties caused by road accidents, Iran ranks 189th among 190 countries.