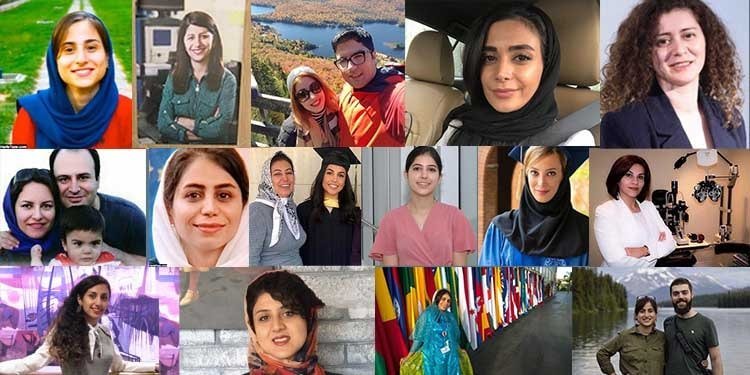 Elite women killed in the IRGC downing of Ukrainian airliner

176 passengers were killed in the downing of a Ukrainian passenger aircraft on January 8, 2020, by the IRGC’s anti-aircraft missiles. The plane crashed just 6 minutes after takeoff. Twenty-eight of the passengers were elite women, who held high academic degrees.

Many graduate students among the victims

The majority of the female victims were students from Tehran University, Sharif Industrial University, and the University of Science and Industry.

Pouneh Gorji, 25, and her husband, Arash Pourzarabi, 26, were both postgraduate students of computer science at the University of Alberta, Canada. They were returning to Edmonton after celebrating their wedding in Iran.

These elite women were part of the nation’s affluence, who were forced to leave their homeland due to lack of education and job opportunities, particularly for women.

Elite women killed with their families

Another elite woman killed in the Ukrainian plane shoot-down was Aida Farzaneh who along with her husband Arvin Morattab, attended the École de technologie supérieure (ÉTS) in Montreal, Quebec.

Mojgan Daneshmand and her husband, Pedram Mousavi, were both engineering professors at the University of Alberta, Canada. They were killed with their daughters, Darya and Darina on their side.

Shekoufeh Choupan-nejad, an OB-GYN who worked in Edmonton, Canada, and was travelling with her two daughters Saba Saadat, 23 and a medical student, and Sara Saadat, 21 and a clinical psychology student.

Azadeh Kaveh and her husband, Dr. Siavash Maghsoudlou Estarabadi, were PhD students in the faculty of engineering in McMaster University, Canada. They were being accompanied by their 15-year-old daughter, Paria.

Farideh Gholami, pregnant, was onboard the plane with her husband, Razgar Rahimi, a sessional instructor at the Ontario Tech University, and their three-year-old son.

The IRGC which targeted the passenger aircraft with anti-aircraft missiles is responsible for the tragic crime and killing of the educated and elite women on board. Following this crime, a wave of grief and outrage swept Iran and spread abroad.

Anger in Iranian universities against Khamenei and the IRGC

Iranian universities were engulfed with anger, with students protesting on campus and on the streets against Ali Khamenei, the regime’s supreme leader. In their slogans, they denounced him as the source of all the calamities afflicting the Iranian people.

“Down with the tyrant, whether the Shah or the Leader (Ali Khamenei)!”

“The elite were killed and replaced with mullahs!”

“The IRGC commits crimes, the leader supports it!”

The missiles fired by the IRGC on the Ukrainian plane sparked a new wave of protests across the country from January 11, 2020. In these protests, the leading role of women and girls was very significant. And the IRGC did not miss this.

In a news release on its website, the Guardian reported on the women who got injured during these protests. Citing an eyewitness, it wrote: “They were firing teargas repeatedly. We couldn’t see anywhere, and we were screaming. We were getting blinded. Forces were firing teargas back to back. A young girl beside me was shot in the leg.”

Many of the families were grieving and mourning for their loved ones in this crime, but the religious tyranny ruling Iran arrested them and took them to unknown locations instead of addressing their sorrow.

According to the official Zaytoun website, on January 12, 2020, some of the families of the victims of the plane crash gathered outside the IRGC headquarters in Amol. The IRGC arrested 14 of the protesters, including 5 women.

In addition to these pressures, Rahim Rostami, the interrogator in charge of this case, had an offensive approach to the families of those arrested and did not give them any information on the whereabouts of the detainees. Some of the families have been threatened that if they talk to the press, the detention of their relatives would be extended.