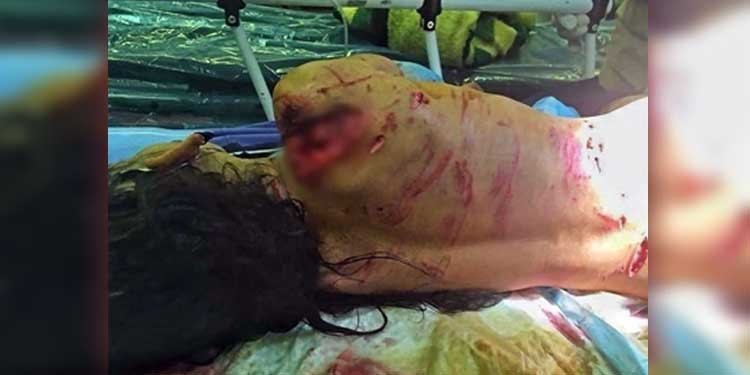 A little girl child laborer only 7 years old was attacked and seriously injured by a group of stray dogs in the streets of Shahr-e Ray, a Tehran suburb, on Tuesday night, January 28, 2020.

A photographer and social activist who posted a photo of the girl child laborer in the social media said: “I was informed that a girl child laborer had been attacked by a group of street dogs while selling flowers last night in one of the streets of Shahr-e Ray. She was seriously injured in the head, neck, shoulder, waist and leg and was subsequently taken to hospital by the people.” (The state-run Tasnim news agency – January 29, 2020)

The municipality and city officials responsible for collecting and transporting child laborers to authorized shelters should now be held accountable, the social activist wrote.

Iranian regime officials have neglected the problem of child laborers to the extent that their presence in the streets and abuse of them have turned into a routine practice.

The news of the little girl child laborer was also reported by an emergency doctor on the Twitter, but no further information has been provided on the girl’s family and the reason why she had to work late at night.

The latest estimates on child laborers in Iran stands at around 7 million.

“Girl child laborers are the most vulnerable among street children,” said a member of the Social Commission’s board of directors in the mullahs’ parliament. “Even if child laborers are collected, the number of child marriages under 15 years of age will rise progressively.” (The state-run Tasnim news agency – September 27, 2017)