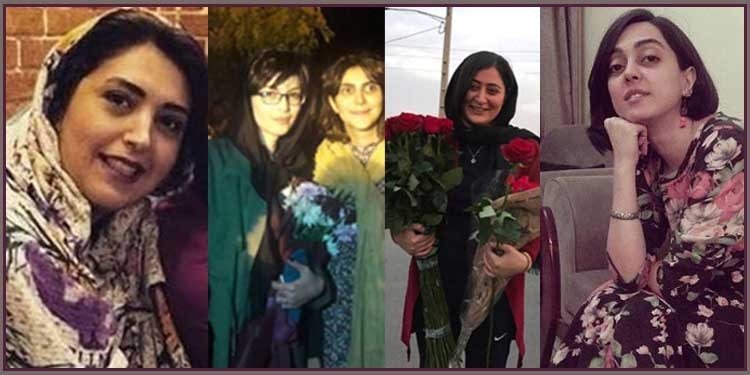 The cases of 5 female civil activists involved in the case of Haft Tappeh sugarcane workers protest and the International Labor Day protest were upheld on January 28, 2020, without being examined by a Revision Court.

The cases of 5 female civil activists, Sanaz Allahiari, Asal Mohammadi, Atefeh Rangriz, Marzieh Amiri and Neda Naji, have been transferred to the Department of Implementation of Verdicts.

Sanaz Allahyari and Asal Mohammadi, defendants of the case of Haft Tappeh protests, each were sentenced to 5 years’ imprisonment.

Civil activists Atefeh Rangriz and Marzieh Amiri, who had been arrested on the International Labor Day, were also sentenced to 5 years in prison.

Atefeh Rangriz and Marzieh Amiri were temporarily released on bails of 1 billion tomans each on October 26, 2019, but Neda Naji remains in temporary detention.

Informed sources say Savin Mahmoudian Rad, 23 from a village in Sardasht (Iranian Kurdistan), was transferred to the Central Prison of Mahabad on January 26, 2020. She had been arrested two months ago by the Intelligence Unit of the Islamic Revolutionary Guard Corps (IRGC) and held in solitary confinement in the “Mahdi Army” detention center in Urmia.

In another development, Nazanin Tousi has been sentenced to two years in prison by Branch 24 of the Revolutionary Court of Tehran for participating in the protests in November 2019 against the fuel price hike. She was arrested on November 19 and is accused of “association and collusion against the state.”

The Iranian regime launched a new wave of arbitrary arrests of civil rights activists and started fabricating new cases for political prisoners in the aftermath of the uprisings in November and January.

At least 12,000 were arrested during the protests in November where 1,500 including at least 400 women and 17 teenagers were killed and another 4,000 wounded.

During the protests in January, an estimated 300 were arrested, but the regime officials has acknowledged the arrests of only 30.