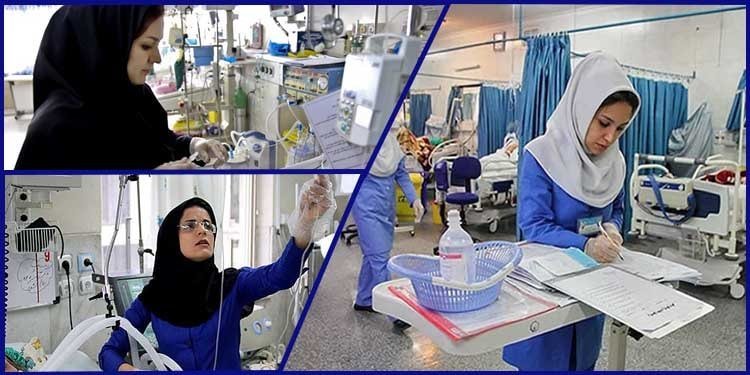 Across Iran, delays in paying nurses’ salaries can take up to six months.

The regime had assured nurses – the majority of whom are women – that they would be paid in full by the end of the year. However, as 2019 drew to a close, that promise went unfulfilled.

In the past few years, the regime has repeatedly agreed to pay nurses’ salaries in full and on time. The nurses were also promised increased employment opportunities. Thus far, the regime’s assurances have failed to yield any concrete results. On the contrary, nurses across the country continue to be at the forefront of the health system, yet they are forced to cope with the challenges and constraints in Iran’s weak patient treatment system. (The state-run Salamatnew.com– February 1, 2020)

Saeed Deh Namaki, the Minister of Health, had agreed to fulfill the regime’s promises to the nursing community. He also said the government would “bring nurses’ demands to zero by the end of this year.” (The state-run Salamatnew.com – February 1, 2020)

In November 2019, Mohammad Mirzabeigi, head of the Nursing Organization, spoke about the chronic delays in paying nurses’ salaries. He added, “There is no reason for nurses to lose overtime pay in exchange for receiving their salaries.” He added, “In some parts of the country, [the regime] has delayed overtime pay by as many as six months. In other areas, [they have delayed] up to one-third of overtime payments.”

Previously, in July 2019, a member of the parliamentary Health Commission had acknowledged the problem. He stated, “Nurses have not received payment for several months. They are increasingly frustrated.” (The state-run Iran-Estekhdam website – July 14, 2019)

In addition to the regime’s failure to pay nurses’ salaries, Mirzabeigi admitted that “Nursing shortages are among the main problems in the country’s health system right now. We have not hired any new nurses in about two years.” (The state-run ISNA news agency – November 16, 2019)

In Iran, under the mullahs’ regime, the health system clearly fails to provide essential services – to nurses and patients alike.