The 1979 revolution in Iran was one of the most magnificent popular movements in the history of liberation movements that ended the dictatorship of the Pahlavi monarchs. With the overthrow of the Shah’s regime, the people of Iran, especially the Iranian women, sought to enjoy their human rights and freedoms to establish a new society. But Khomeini usurped the leadership of the revolution and deviated its goals.

Only a week after the 1979 Revolution, Khomeini began his onslaught on women’s freedoms with a clampdown on women’s rights. Gender discrimination and misogyny are the ideological essence of the regime founded by Khomeini.

Below is a brief history of the steps the mullahs took during their rule to gradually deprive Iranian women of their rights:

By the end of 1981, the sex-segregation was implemented in public transportations, recreation centers, seaside, and other public areas.

In 1983, the legal marriage age for girls was decreased to the age of 9. Then, almost a decade later, it was increased to 13. 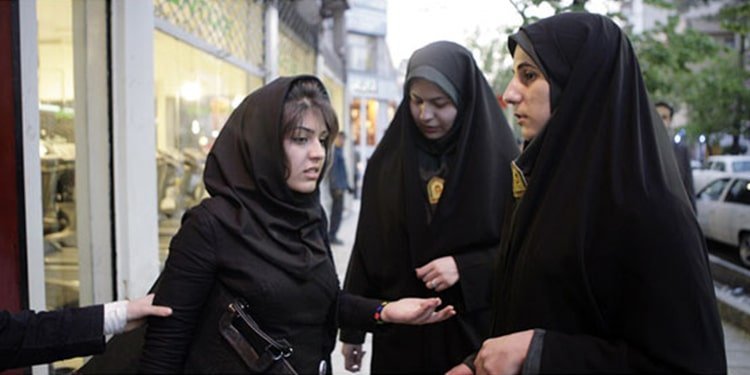 According to Article 1041 of the Civil Code reformed and amended on November 5, 1991:

Marriage of girls before 13 solar years and boys before 15 solar years is conditioned on the permission of the guardian on the condition that a qualified court deems it appropriate.

According to Article 102 of the Punishment Law ratified in 1983, women who appear in public and in the streets without the religious veil are punished by 74 lashes of the whip.

Article 8 of the mullahs’ Constitution institutionalized the duty of “promoting virtue and forbidding vice.” In the year 2010, the mullahs’ extremist president, Mahmoud Ahmadinejad, placed greater emphasis on this law by supplementing it by another bill.

In 2010 another act was embraced to “spread the culture of chastity and Hijab” according to which at least 26 government agencies were instructed to carry out duties to enforce the compulsory veil on Iranian women.

In 2014, the mullahs’ parliament passed two articles of a new bill which lent support to those who promote virtue and forbid from evil. The rest of the bill was adopted in 2016, which gave priority to the views of the mullahs’ supreme leader and was readily implemented. Such legislations prepared the grounds for gangs tied to the regime to splash acid on a large number of women under the pretext of improper veiling.

In 2012, the regime implemented an extensive plan in all universities, designating gender quotas for admission of female students. According to this plan, girls were completely banned from applying for B.S. or B.A. in 77 fields of study. In the same year, new universities were built to facilitate gender segregation among university students by admitting only one sex.

In mid-April 2013, Khamenei offered a plan to increase the country’s population, by boosting the average birth rate. The mullahs’ parliament followed suit and passed a legislation which openly placed further restrictions on women’s employment and family rights.

In January 2016, the mullahs’ parliament passed a bill to protect chastity and veil. According to this new bill, women could be employed only in businesses where the workplace is completely gender segregated. Furthermore, women were subjected to new time limits restricting their working hours to between 7 a.m. and 10 p.m.

According to Article 18 of the Passport Law, women may not obtain a passport or travel outside the country without the written permission of their husbands. (The state-run Khabaronline.com, September 16, 2015)

The clerical regime has created countless restrictions in all aspects of women’s life such as ban on women’s bicycling, entry of women spectators to sports stadiums, women’s musical performances on stage, and solo singing, among others.

The coercions and restrictions of the clerical regime, however, has not been able to stop Iran’s women from fighting for their rights.  Despite four decades of inhuman oppression, Iranian women have never remained silent, but expanded their struggle.

More and more women and girls have joined the resistance movement against the mullahs’ regime and have paid a heavy price for it, as well.

In the 2.5 years after the revolution, dozens of girls supporting the opposition People’s Mojahedin Organization of Iran (PMOI/MEK) were killed or wounded in attacks by government-backed club wielders. Nassrin Rostami, Mehri Saremi, Sima Sabbagh, Fatemeh Rahimi, Somayeh Noghreh-Khaja, and Fatemeh Karimi were high school students who lost their lives in such attacks. 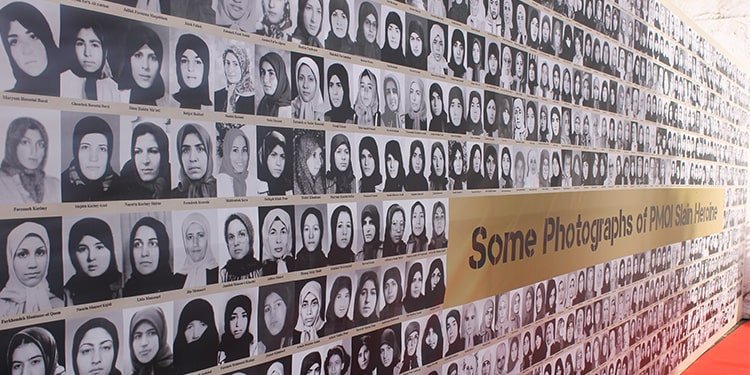 On June 20, 1981, when Khomeini ordered his revolutionary guards to open fire on the peaceful demonstration of half-a-million people of Tehran, Iranian women chose the honor of resisting the regime instead of submitting to it. The clerical regime began its mass executions on the same day. The first series of those executed were high school girls as young as 16 and 17 who had not even given their names.

In the 1988 massacre of 30,000 political prisoners, group after group of PMOI women were hanged.

Shooting women in the womb and letting them die in pain, raping virgin girls before execution, amputation of body organs, extended confinement in solitary cells called “the cage,” execution of young girls, pregnant and elderly women, and even torturing young children in front of their mothers’ eyes are only a small part of the mullahs’ hysteric savagery directed against Iranian women. 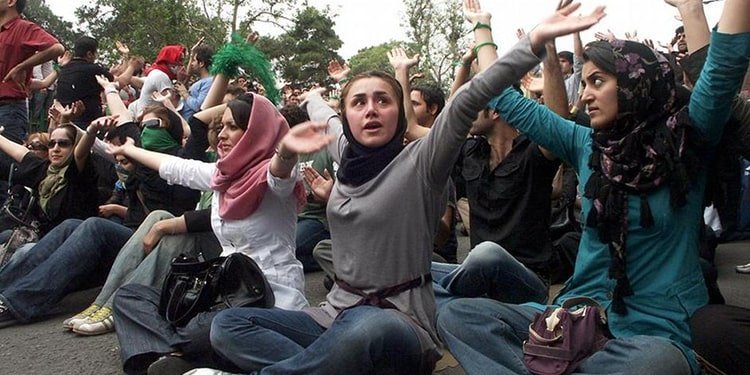 Once again in 1999, the uprising of Iranian students flared in Tehran, shaking the regime to its foundations. Young women and female students demonstrated a new image of their resistance against the mullahs during this uprising, and even a female student, Fereshteh Alizadeh, was killed by the regime’s security forces.

More freedom loving women and girls lost their lives during the Iranian people’s uprising in 2009, including Taraneh Moussavi, Shabnam Sohrabi, Maryam Soudbar, Fahimeh Salahshour, and Neda Agha Sultan who died innocently and became the face and symbol of the 2009 uprising.

In the December 2017- January 2018, women played a prominent role in launching the popular protests. At a demonstration in January, female students chanted, “Reformists, hardliners, the game is over!” And by doing so, they announced that all factions of the clerical regime have lost their legitimacy and the regime should be changed in its entirety.

More than 500 young women and girls were arrested and imprisoned for participating in the December 2017-January 2018 uprisings. 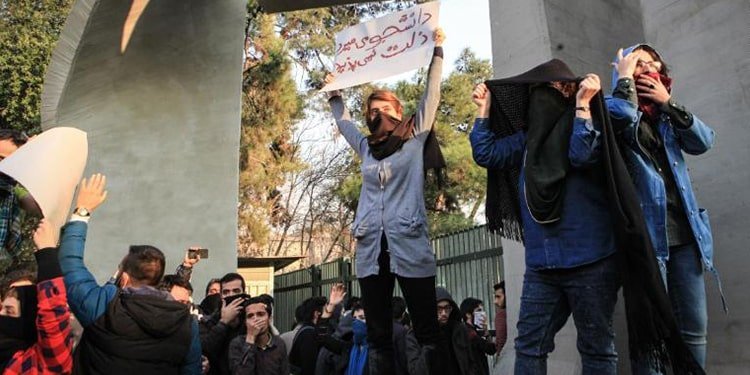 The regime’s experts and media confessed to the remarkable role and leadership of Iranian women in the November nationwide uprising against the fuel price hike.  The IRGC-backed Fars news agency wrote in this regard: “Women’s special role in running and leading the recent riots seemed remarkable. In numerous places particularly in Tehran suburbs, women who were apparently between 30 to 35 years old, had a special role in leading the riots.” (The state-run Fars news agency – November 20, 2019)

Mrs. Maryam Rajavi, the President-elect of the National Council of Resistance of Iran (NCRI) praised Iranian women in a message by saying, “Women actively participate, leading and supporting the protesters. We had already said that women are the force for change and will defeat the mullahs’ reactionary and religious tyranny.”

On December 15, 2019, the Iranian Resistance announced that more than 1,500 people were killed by the security forces in the November protests. Then, on December 23, Reuters news agency confirmed from sources within the Iranian regime that 400 women and 17 youths were among those killed. 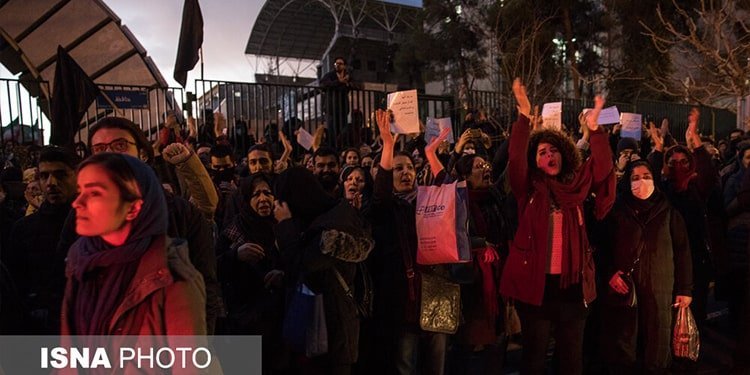 In less than two months, Iran saw another wave of uprisings.

Freedom-loving Iranian women and female students participated extensively in the protests in January 2020 against the downing of a Ukrainian passenger aircraft by IRGC missiles. Participants in the protests called for resignation of the mullahs’ supreme leader Ali Khamenei and for regime change.

The Guardian website noted the leading role of women in these anti-regime protests in Iran. Citing an eyewitness, the Guardian reported, “Many led by women, gathered in Tehran’s central Azadi Square on Sunday evening wearing masks and scarves to hide their identities, confronting riot police and officers in plain clothes.”

The courageous women of Iran will carry on their struggle until they overthrow the mullahs’ misogynous theocracy in its entirety and bring freedom and equality to their country.