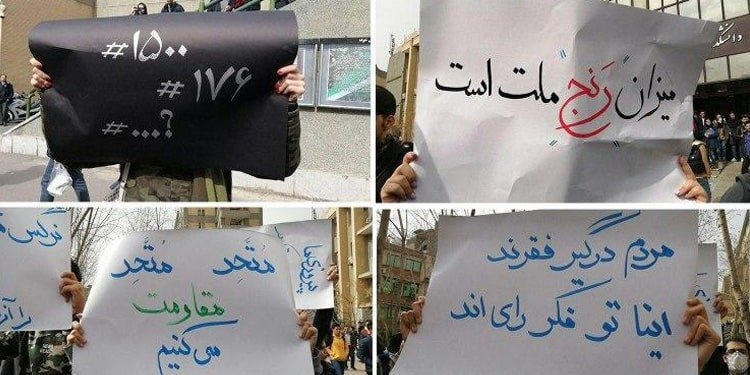 Students of Amir Kabir University of Tehran went out in a massive protest, chanting slogans, declaring their intent to boycott elections and overthrow the regime.

On Sunday, February 16, female students played a prominent role in leading student protests. Plain clothes agents and members of the Department of Intelligence at the university attacked the protesting students who stood up to them by chaining their arms.

The students rally at Amir Kabir University also commemorated the victims of the Ukrainian aircraft downed in a missile strike by the IRGC. Students also honored the memory of victims of the uprisings in November 2019 and chanted:

Reports of other protests

Also on Saturday, February 15, protesters held a rally outside the Intelligence Department in Sanandaj to protest the arrests of their relatives. Protesters demanded the immediate release of all detainees and announced that they would gather every day to continue to the protest.

On Sunday, February 16, students from Tehran University held a protest in front of the Student Club.

In response to the call for an election boycott, residents of cities across the country tore down pictures and propaganda posters of regime representatives. In Bandar Abbas, protesters destroyed one of the election headquarters.