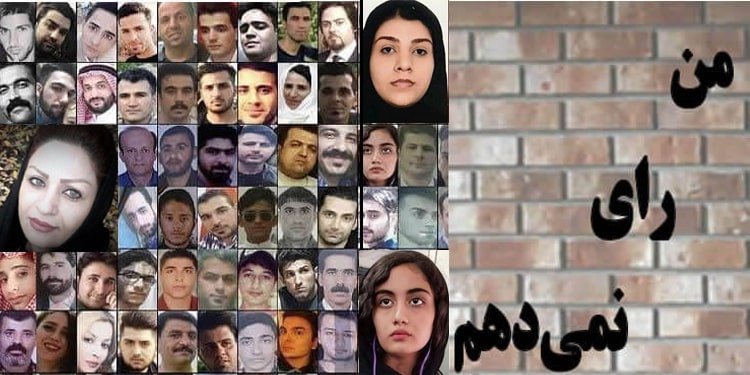 Election boycott, a testament to Iranians’ pledge to martyrs

A group of female political prisoners in Evin Prison wrote a statement for regime election boycott. They expressed their pledges and unity with the martyrs of the uprising by boycotting the elections.

In their statement, these female political prisoners mentioned the tyrant rule of the supreme leader and wrote that from the very first days, the Iranian people were robbed of their freedom and their votes.  By repeating the word election, the regime is trying to portray itself as democratic.

The statement reads: “From the day the Assembly of Experts was formed to form and protect the absolute religious rule (the Supreme Leader) instead of the Constituent Assembly with the free elections of the Iranian people, the right to sovereignty and election of the Iranian people was seized and stolen.

The Islamic Consultative Assembly (parliament) was formed, with the previous elimination of all political groups except the narrow circle of totalitarian tyrants.

As we now see, it is not a democratic institution but an element completely antihuman and in total service to the sovereignty which is ruling Iran and has no use whatsoever. As all general approvals during the past years confirm it.”

In this statement, they cited the regime’s fear of election boycott and wrote about the recent uprisings: “In fear of the nationwide election boycott, government officials come to the scene one after the other and publicly invite people to vote.

But the Iranian people have declared their true and irreversible votes from January 2018 – until the bloody uprising of November 2019 – with sacrificing their lives in the streets.

Such a reactionary and medieval government stood against the policy of the people and their election in the streets, which resulted in the killing of 1,500 people in a very short time, which is another disgrace in the regime’s criminal record.

This regime and its elections are based only on the blood of millions of innocent youth. But the Iranian people do not allow even a drop of unjustly shed blood to remain unanswered. It is our duty to stay in the true side of popular elections.

Anyone who goes to the polls, their fingerprint will be registered on the trigger that fires on the youth, and it would be a sign of support for the ruling system and its crimes.

The boycott and rejection of the election is the Iranian people’s pledge with the martyrs, especially the martyrs of the recent uprising.”

The names of the signatories are as follows: