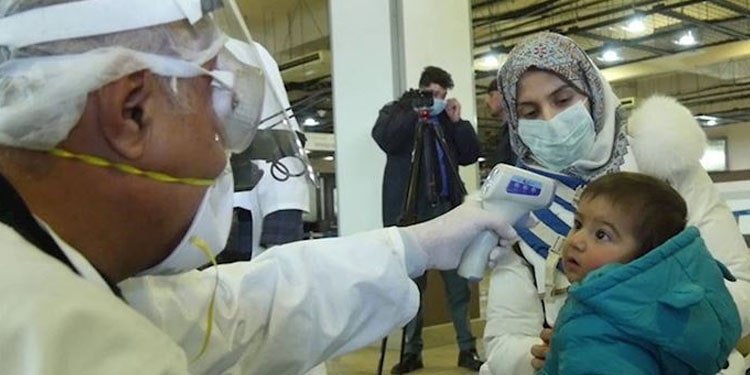 The Iranian regime's secrecy over the spread of coronavirus in various cities is causing public anxiety, spreading disease and increasing casualties.

Woman dies of coronavirus in the city of Saveh.

The head of Arak University of Medical Sciences, Mohammad Jamalian confirmed the death of a woman and said that a 79-year-old woman had died of coronavirus disease in Saveh and her body had been transferred to Tehran to verify the cause of death by the virus.

By Thursday, February 20, 2020, on the second day of the official announcement of a coronavirus outbreak in Iran, 8 cases were reported, one woman infected with the virus passed away at Imam Reza Hospital in Qom, and two others in northern Iran.

Saeed Namaki, Minister of Health and Medical Education said that the number of referrals to hospitals has increased dramatically and “we have faced an outbreak of referrals.” (The state-run IRNA news agency – February 20, 2020)

Mostafa Eqlima, a government expert, said two doctors died of coronavirus because we do not have isolation equipment. We do not have a well-equipped hospital to treat patients with coronavirus. We have only 5 virus test kits. We had to buy it in advance!” (The state-run Jahan Sanat News newspaper – February 22, 2020)

At Imam Reza Hospital in Qom, 4 people passed away. In an environment of concern and protest against the regime, people in Qom say that the regime’s graduate recruiters for and from China and whose travel is not restricted are factors in the transmission of the virus.

In this regard, despite the denial of Rouhani’s vice-president Jahangiri, the Eqtesad Online website revealed that despite the observation of coronavirus, the IRGC Mahan flights to China continue on the February 20, 2020. In this regard, female students of Isfahan University of Medical Sciences held a protest rally against the indifference of the university’s president duties for their health care to counter the coronavirus disease. Also, in several other cities, people rallied in protest to the regime’s inefficiency in tackling this dangerous virus.

People in the city of Qom are long in lines in front of pharmacies to buy masks, but they have run out of masks. (The state-run Arman newspaper)

Abusing people’s concerns, the regime is charging more than a million tomans (Approx. 237.95 USD) to for coronavirus tests in Qom and some other cities.

All pharmacies are full of people looking for filtered masks, disinfectant gels and alcohol. Pharmacy staff say the supplies may be distributed in pharmacies on Saturday. (The state-run IRNA news agency – February 22, 2020)

Contradictory government statistics on the spread of coronavirus in Iran

The Ministry of Health refuses to provide accurate statistics on coronavirus. The Director General of the World Health Organization stated that they are concerned about an increase in the number of coronavirus cases in Iran, which currently only 18 cases and 4 deaths have been recorded.

Radio France Internationale (RFI) quoted a senior government official as saying, “The number of those infected and suspicious of coronavirus in Qom has exceeded 300 people.”

The media also reported that the Turkish Minister of Health following a conversation with his Iranian counterpart announced in a Twitter message on Friday, February 21, 2020, that there were 758 suspected cases, 18 definite cases, and 5 deaths in Iran. ”

The official IRNA news agency also quoted Iran’s health ministry spokesman Kianoush Jahanpour on Saturday, February 22, 2020, that the number of people suspected of coronavirus in Iran had increased to more than 785, adding that by Saturday evening February 22, 2020, 10 new cases of coronavirus were confirmed. Eight of them had been hospitalized in Qom and two in Tehran.

The head of the Passive Defense Organization of Iran also announced, “After the examinations by specialist doctors, we are now out of the white state and have entered the yellow state. But we have yet to come up with a place to quarantine.”

According to Canadian officials, a woman who returned from Iran a week ago was diagnosed with coronavirus and it was a surprise to find that she had been infected with the coronavirus on visit to Iran which had officially confirmed the coronavirus outbreak just two days ago. The woman, who has just arrived from Iran to Canada, is the sixth person to have coronavirus in a Canadian state. (The Canadian TV News Network)

With internal suppression and spreading terrorism to other countries in order to maintain its rule, the regime has never observed the suffering, diseases, floods, earthquakes, and problems of the people.

In 2018, an assessment was published of the commitment of 195 countries on ways to combat contagious viruses. In this research, the Iranian regime gained no more than 37.7 points and was ranked No. 97 in the world ranking. This clearly shows why government agencies in Iran failed to take the necessary measures to counter the spread of coronavirus, even denying all evidence, despite the presence of suspected cases. By giving false information they did what they had done during the crash of the Ukrainian plane.

Mrs. Maryam Rajavi, the President-elect of the National Council of Resistance of Iran, declared that the criminal mullahs covered up coronavirus cases in a bid to bring crowds for the Feb. 11 revolution anniversary and the sham elections, adding that the mullahs’ regime must put all medical resources at the disposal of physicians and nurses in different cities to enable them to attend to those suffering from the virus and to cure them.

Ms. Rajavi also called on the World Health Organization (WHO) to immediately dispatch its supervisory and medical teams to Iran to not allow a rise in the number of Coronavirus victims.