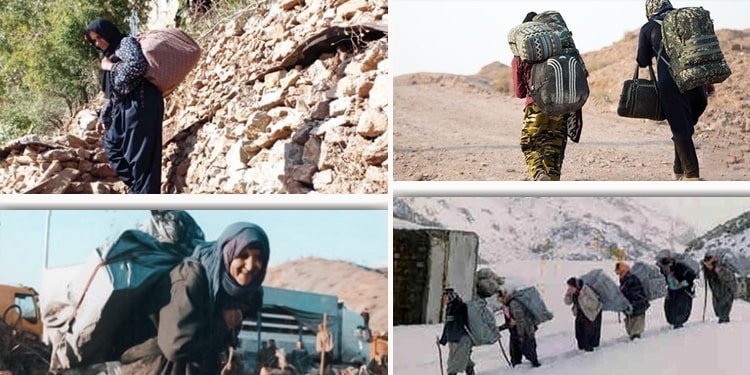 The state-run newspapers and media in Iran headlined the significant increase in the number of porter women in the border villages in the provinces of Kurdistan, West Azerbaijan and Kermanshah.

On January 22, 2020, the state-run asriran.ir published a report on porter women who have been forced into this job out of poverty. The report said not only men but also women were carrying heavy loads on the rough roads in the border mountains in western Iran.

Due to the high unemployment rate in border provinces of Iran, porter women are trying to tackle some of their economic problems with minimal income they earn by doing this difficult job.

A number of porter women interviewed on the hardships of this job, said that in recent years men have become accustomed to women being porters, and that being a porter is no longer a masculine job. Some women in these areas have to carry 30 kilograms of cargo through the mountains for four or five hours. A woman named Tahmineh, who is 33 years old now, is unable to work due to a lumbar disc. Tahmineh said, “I was a porter since I was 21 because my husband was alone and his job was difficult. Me and three other women from Salas-e Babajani and Javanrud (in Kermanshah Province), would buy gasoline from dealers and carry them through the mountains in 10-liter containers. This, of course, was several years ago, and it has become very difficult now. It often happens that inspectors confiscate our loads and we lose a lot. The rate of dollar exchange has risen, and we can’t buy anything with our money. Just taking the load and selling it would earn us just enough to soothe some of the scars of our lives.”

Hiva’s father went to the mountains and never returned

A young girl named Hiva with a heavy Kurdish accent said, “Our father did whatever he could for us by working as a porter. He went to the mountains seven years ago and never returned. We no longer had a breadwinner. I was the one who had to do something. At first, when I became a porter it was a little hard, but after a while I got used to it. Every time I go and come back, I have back pain for a few days. I know many porter women who go to the mountains several times a month and work with their husbands. It is very difficult to go up the mountain carrying a load of about 30 kilograms on your back, for 4 to 5 hours and return the same load. But there is no other option. I have to make money.” Another woman by the name of Maryam, has been working as a porter for eight years to raise her daughter. She said, “I have seen various people who have had to do this job due to the circumstances of their lives. They have a master’s degree and can’t find a job. Some people do not even have an insurance after 65 years of their life, and in their senior years, they have to cross these difficult paths to provide for their families.”

Another woman said she works as a porter to raise her seven children. Her husband is a retired municipality worker. She said, “I’ve been working as a porter for seven years.”

For many years, livestock and agriculture have not been sufficient to provide for the lives of people in the western provinces of Iran. So, they have been forced to work as porters and tread through the mountains. Porter women wear men’s clothing to reduce their problems when passing through the rough mountain paths. In Sardasht, Piranshahr, Marivan, Salas-e Babajani, Javanrud, Saqqez, and etc. one can see long queues of porter women who provide for their families. Poverty and unemployment have driven them to the mountains to work as porters.