Although women have been celebrating Women’s Day for nearly a century, the UN General Assembly called on member states to recognize March 8 as UN Day for women’s rights and world peace in 1977.

March 8 is the culmination of the tireless efforts of women throughout history in their fight for equality. This day is a reminder of efforts to combat gender discrimination and sexism.

For the past 40 years, Iranian women under a misogynist dictatorship, have been subjected to gender-based discrimination, repression and brutal state violence more than any other nation. But over the years of confrontation with the clerical regime, generations of women have emerged realizing that equality in Iran is impossible without overthrowing the dictatorship and erasing all its discriminatory laws, traditions, and cultures.

They have proved with an irrepressible spirit and admirable courage that they can and should be held accountable standing up and sacrificing for freedom and equality at the highest levels. Since the 1980s, thousands of vanguard women have endured the most difficult times and severe tortures under the clerical regime. Many of them were martyred.

Ashraf Rajavi led the way in this struggle and is a symbol of PMOI/MEK women, inspiring many to fight for freedom.

Thousands of Mojahedin women have lost their lives under torture or at the gallows standing steadfast for their beliefs. Zohreh Gha’emi, Giti Givehchian, Saba Haft-Baradaran, and Asiyeh Rakhshani offered their lives to keep aloft the flag of struggle for freedom and equality.

Today, a new generation of brave Iranian women in the Resistance Units in Iran are leading the fight to overthrow the mullahs’ tyrannical rule.

Women played an active role in the November 2019 uprising that spread to 191 cities within a few days. In Tehran, the first night of protests against the rise of petrol prices on Hakim’s highway, as people shut down cars and blocked the highways one brave young woman chanted “Down with the dictator” which led to the joining in of the people on the scene. This scene was repeated over and over again in the November uprising. Regime officials, Revolutionary Guards and government media have repeatedly voiced their concern over the role of young women in the uprising.

On November 20, 2019, the state-run newspaper Al-Mashregh wrote: “Women had a remarkable role in the recent mischief. They had special role in various scenes in inciting the public to carry out acts against the establishment.”

The Fars news agency, affiliated with the Revolutionary Guard Corps (IRGC), wrote: “Some women had pivotal role in leading the riots.” Fars added, “Women’s special role in running and leading the recent riots seemed remarkable. In numerous places particularly in Tehran suburbs, women who were apparently between 30 to 35 years old, had a special role in leading the riots… These women wore the same garbs, each had a different role; one filmed the riots, the other stopped the cars, and another one incited the people to join the ranks of riots…” (The state-run Fars news agency – November 20, 2019)

The regime’s interior minister, Abdul Reza Rahmani Fazli, stated that: “Two or three hours after dusk we encountered cells comprising of 4 to 6 persons, usually accompanied by a woman enticing people to join in the protests.” 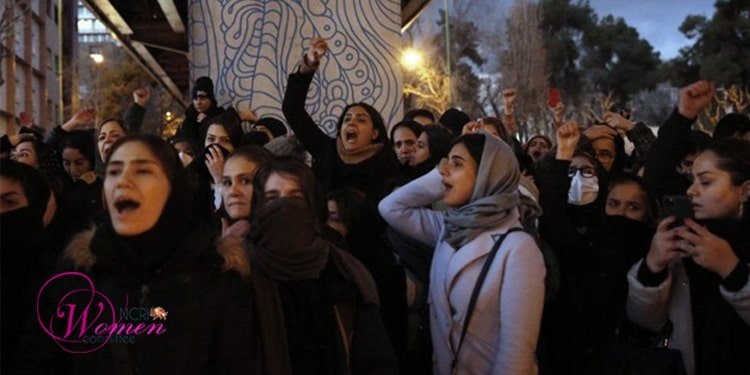 In response to these protests, the religious dictatorship used the most brutal methods of repression, from the use of live ammunitions, to tanks and helicopters, and the slaughter of people who had sought refuge in the everglades. As a result of the brutal repression 1,500 people were killed, 400 of whom were women. According to a recent report by Amnesty International, at least 23 children were “shot dead by Iranian security forces unlawfully firing live ammunition at unarmed protesters and bystanders.”

Among the victims were little girls as young as 3 and 8 years old, a young woman, 14, as well as mothers of many children and women as old as 60 years of age. Many more were arrested and subjected to the most severe torture and inhumane conditions in the mullahs’ prisons.

In spite of this brutal crackdown, the Iranian people rebelled again in less than two months, in a series of protests against the IRGC’s killing of innocent passengers onboard a Ukrainian aircraft. The role of women in leading these protests were again apparent and one of the most decisive parameters.

Referring to the leading role of women, a witness told the Guardian that many of the protest gathering in Tehran’s Azadi Square on  evening were led by women. “They used scarves and masks to cover their faces while confronting riot police and plainclothes officers.”

What these women sacrifice their lives for can be summarized into these four words: freedom, equality, democracy and emancipation.

They have come to the realization that they must liberate themselves from compulsory religion, dictatorship and compulsory hijab. They believe that in order to eradicate the gender, class and systematic inequality and repression they are the ones who have to stand up and fight for it.

The brave Iranian women are not only fighting for their own emancipation, but also for the individual freedom of the Iranian people. Their point is that women of all nationalities, religions and social classes should enjoy equal rights with men in all economic, social and political contexts. This clear vision will be realized by the determination of the people and their resistance led by the Iranian women. And so, on this March 8, when the women around the world are striving to achieve equality, the International Women’s Day in Iran stands for freedom and democracy which is adorned with the names of women who gave their lives in the Iran uprising in November 2019, symbolizing a new generation of vanguard women struggling for social equality and freeing their land from theocracy. Women who have proved the “Generation Equality” in practice and in the toughest social scenes in the battle for the overthrow of a religious fundamentalist dictatorship and have obtained the leadership of the uprising for freedom.