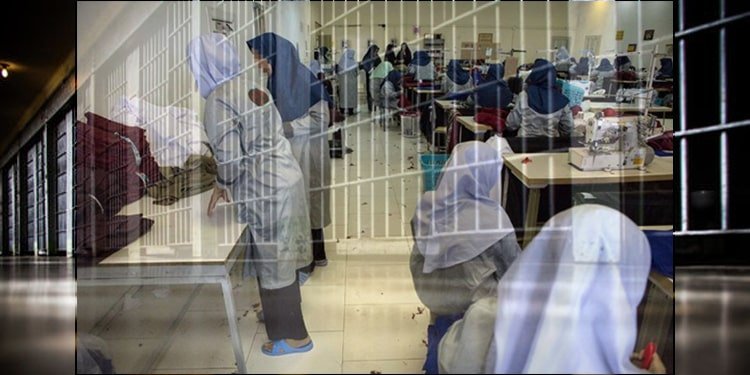 Women inmates in Iran describe earning a living while in prison as “non-profit imprisonment.” The inmates at the general women’s wards of Evin and Qarchak prisons must think daily about their livelihoods, even though they are imprisoned.

All prison services in Evin and Qarchak are provided by the prisoners.

A female inmate at Evin Prison describes some of the problems involved with non-profit imprisonment, saying, “Outside prison, I was making a minimal wage but managed to rent a house based on my earnings of 1.5 million Tomans a month. Now, in prison, I am not renting a house, but I am spending a million Tomans just to get by.”

In light of the high prison prices, many prisoners work hard to provide for their own needs, and send part of their earnings to their families or relatives. According to regulations set by the Prisons Organization, items available for purchase in prisons must cost the same as the same items outside prison. However, at Evin and Qarchak prisons, the vegetables and fruits that reach prisoners cost 30 to 50 percent more than those in the open market.

The prison shop official says that all items are sold at a 25 percent price hike from the markets. Other items on the prisoners’ weekly lists are up to 40 percent more expensive, under the pretext that the cost of transporting goods is included.

These price increases represent a pattern of abuse for which no one is accountable.

For example, yarn typically costs 6,000 Tomans. However, it is only available to prisoners at significantly higher prices that range from 12,000 to 15,000 Tomans.

At Qarchak Prison, water salinity is so high that prisoners must buy mineral water. The prison charges between 3,500 and 5,000 Tomans per bottle.

While prisons have a budget of about 1,700 billion Tomans, there are no statistics as to how much of this money actually goes to the prisoners. Work of prisoners in Qarchak Prison

In the regime’s prisons, the term “working vote” is used to denote an inmate who works for the prison workshops in exchange for enhanced privileges such as monthly visits, extended telephone calls, or freedom of movement in the corridor and other parts of the prison.

Regular prisoners are entitled to no more than 10 minutes for telephone calls and must work to earn additional minutes.

In Qarchak Prison, several inmates work as servants in the dormitory of the prison personnel – preparing their food, washing their dishes, and even laundering their bed linens – from morning until night. Their daily wages are 40 minutes per day for the use of the telephone and 70,000 Tomans per month. Prison authorities also employ female inmates as their servants.

Other jobs in prison include cleaning the corridor, cleaning the washroom, distributing food, timing the telephone, helping with health care, being the ward’s contact with the dispensary, and running the ward.

Exploitation of prisoners in workshops

One contractor who works with Evin Prison and the Correctional Center says they [the company] rented space for a workshop at Evin Prison. They paid monthly rent and were exempted from taxes and utility bills. The contractor said, “In my workshop, 35 to 40 inmates worked 6 hours a day. I paid them between 100,000 to 400,000 Tomans, depending on their skills and efficiency. This was the case until three years ago. But now that we are working with the Prison’s Cooperative Foundation, things are different. We no longer pay rent, and we divide our sales profits about 50-50. We do not pay prisoners’ wages; the Prison’s Cooperative Foundation does. They also divide their profits at a ratio of 30-70, and give almost 30 percent, or in some cases, 40 to 50 percent of it as wages to the prisoners.”

The state-run khabarfoori.com revealed examples of this exploitation, quoting one of the prisoners: “We sew clothes in the workshop. The clothes get labeled by a sponsor, and are later sold at much higher prices at the prison boutique. For example, cotton trousers might cost 20,000 Tomans outside of prison, but here, they cost between 70,000 to 90,000 Tomans.” (The state-run khabarfori.com– February 3, 2020)

Khabarfoori.com described additional dimensions of the torture of female prisoners, writing, “A prisoner’s monthly ration of food is one small chicken, 250 grams of red meat, six eggs, five small individual portions of cheese, rice, oil, and half a kilo of potatoes and onions. Prisoners who receive the food ration can no longer use prison food. In Ward Two of the women’s general ward in Evin Prison, several children who are in jail with their mothers eat the same food that is brought to the rest of the prisoners.”