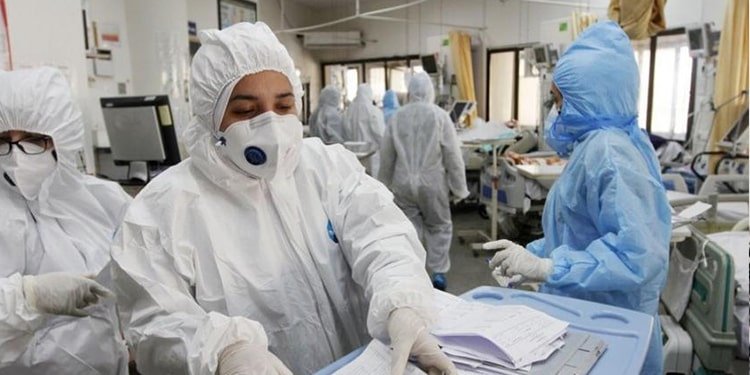 Another selfless nurse dies in Iran due to Coronavirus infection

Another selfless nurse died in Iran due to Coronavirus infection. Head of the Nursing Organization of Qom announced the death of Tahereh Esmaili, a nurse working at Beheshti Hospital of Qom.

Also Dr. Fariba Farahi working at Qom’s Kamkar Hospital diagnosed and signed her own papers to be hospitalized.

According to the official IRNA news agency, the Medical Sciences University of Qom declared that “40 physicians and 130 nurses in Qom have contracted the coronavirus while caring for patients.”

The Iranian Resistance has announced that as of Monday evening, March 23, 2020, the death toll due to Coronavirus infection in 212 cities of Iran exceeded 10,500.

In Qazvin, hospitals are full and the International Exhibition Center of Qazvin has been dedicated to Coronavirus patients. In the meantime, the death toll is continually on the rise in Qazvin and other cities including Kordkuy, Maku, Neyshabur, Semnan and Aliabad.

According to doctors in Gilan, many of those released from hospitals die after one week, but their numbers are not counted in the death toll due to Coronavirus.

Qazizadeh Hashemi, Rouhani’s former Minister of Health, has been cited as saying on March 22: “Since mid-December, I have raised concerns about Coronavirus outbreak with senior officials in the country, including the president. Still, most of my efforts have been ineffective so far.”

Mrs. Maryam Rajavi, President-elect of the National Council of Resistance of Iran, said: “While (the Coronavirus) disaster has swept across Iran and the number of victims continues to grow, Khamenei did not offer any solutions, nor even a promise to help the people.”