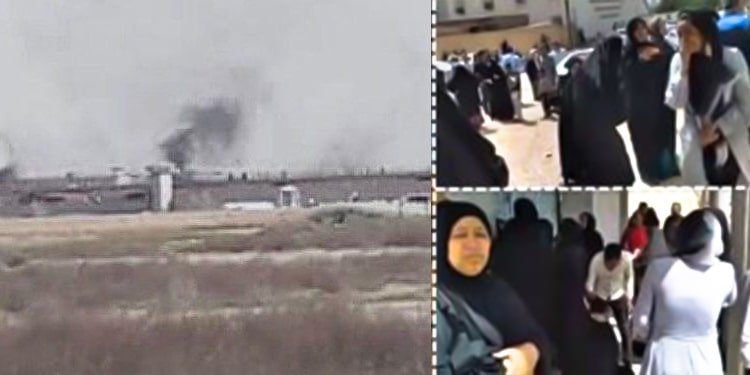 Families of inmates imprisoned in Shaiban Prison and Sepidar Prison of Ahvaz including a large number of women, mainly their mothers and wives, gathered on Ahvaz-Shushtar Road on Tuesday, March 31, 2020 for the second day in a row after they were turned away and prevented from approaching the prison compounds. This was the second day these women and relatives were protesting against the authorities’ crackdown on inmates in the two prisons where riots broke out on Monday and Tuesday in Sepidar and Shaiban prisons, respectively. Security forces responded to families by shooting and lobbing tear gas at them. Riots erupted in the Sepidar Prison of Ahvaz on Monday, March 30, where prisoners protested against lack of hygienic resources in prison and discrimination in granting prison leave to prisoners amidst the coronavirus outbreak. Security forces and prison guards responded by firing shots and tear gas at prisoners.

The commander of the State Security Force in Khuzestan Province denied killing of inmates in Sepidar and Shaiban prisons, but human rights defenders have reported on the deaths of 20 prisoners in the course of riots in these two prisons.

Eyewitnesses have reported that at least 30 ambulances were escorted into Shaiban Prison after sunset and transferred prisoners to the IRGC’s Baghaii Hospital. Some of the wounded prisoners have also been transferred to Khomeini Hospital in Ahvaz.

Families of prisoners are very concerned about the fate of their relatives, but their inquiries have remained unanswered.

Riots have broken out in some 12 prisons in various cities, including in the Parsilon Prison of Khorramabad, Prison of Aligoudarz, Prison of Tabriz, Saqqez Prison, Adelabad Prison of Shiraz, Prison of Hamadan, Prison of Mahabad, the Greater Tehran Penitentiary, Sepidar Prison, Shaiban Prison, Ghezel-Hessar Prison, and the Prison of Yazd. Inmates have protested against officials’ refusal to grant them prison leave despite rapid spread of the COVID-19 infection in prisons. A number of inmates managed to escape from these prisons.

Latest data collected by the Iranian Resistance indicate that 16,100 Iranians in 237 cities have lost their lives to the coronavirus infection as of Thursday evening, April 2, 2020.

Women prisoners at serious risk amid spread of coronavirus outbreak