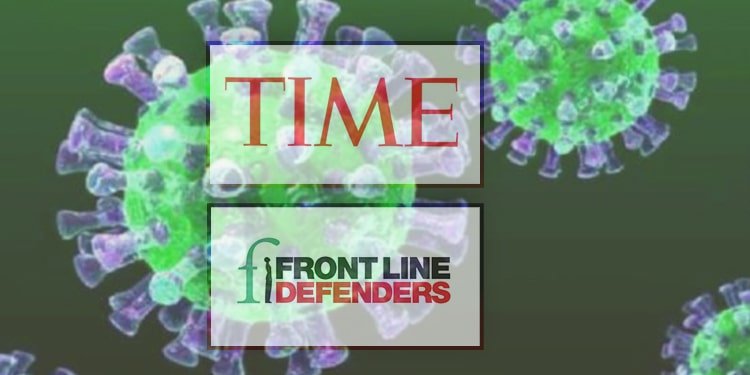 Women prisoners at serious risk amid spread of coronavirus outbreak

The Time magazine and Front Line Defenders wrote on the situation of women held in Iran’s prisons amid the spread of coronavirus outbreak.

Highlighting the hunger strike by Nasrin Sotoudeh, a lawyer and human rights defender, the Time wrote: “Jailed Iranian human rights activist Nasrin Sotoudeh has announced she is going on a hunger strike to demand the release of political prisoners in Iran, a move taken amid fears that inmates’ safety could be jeopardized by the coronavirus outbreak overwhelming the country’s health system.”

“The same military and intelligence agencies that compromise the safety of this nation with their antagonistic policies are insisting on keeping the political prisoners in prisons until the horrors of this health crisis spread to their lives and impact their families, as well,” Sotoudeh wrote in a March 16 statement from Evin Prison.

Meanwhile, in another article, Front Line Defenders demanded the release of all human rights defenders imprisoned in Iran, who, given the conditions in which they are held, are at serious risk due to the spread of coronavirus outbreak.

According to the Front Line Defenders, “Iran has been severely affected by the pandemic. Although there are no official figures on how many detainees have been infected, the families of prisoners have reported several cases at Evin, Zanjan and Rajai Shahr prisons, where many human rights defenders are being arbitrarily held. The overcrowded wards, denial of proper medical care, and unhygienic conditions inside the prisons raise concerns that the virus could quickly spread among prisoners, including the detained human rights defenders. Should they get infected, it is highly unlikely that they will receive adequate medical treatment.”

The international body called on the authorities to release all human rights defenders immediately and unconditionally, provide them with appropriate medical attention, and take all necessary measures to guarantee their physical and psychological integrity and security.

Role of Iranian women in combating coronavirus outbreak despite cover-up