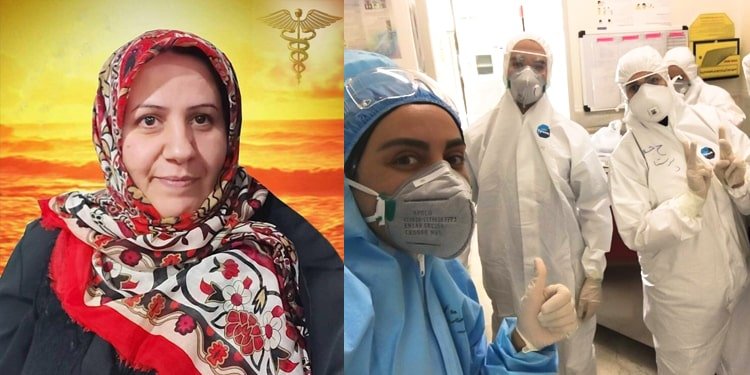 Another selfless nurse from Gilan lost her life to the coronavirus

Another selfless nurse lost her life to the coronavirus. Shahrbanou Jafari was a hardworking and selfless nurse who cared for patients in the medical and health centers in Ziaz village in Gilan Province, northern Iran. The selfless nurse died in the Amini Hospital of Langroud where she had been hospitalized after contracting the disease.

In the northwestern East Azerbaijan Province, 90 of the medical personnel have been infected, said the public relations director of the Medical Sciences University of Tabriz.

In Kurdistan Province, western Iran, 40 of the staff and nurses of a hospital in the city of Saqqez have tested positive for coronavirus.

Some 80% of nurses in Iran are women who are at the front line of the fight against the COVID-19 disease.

Elsewhere, in Golestan Province, northern Iran, some 350 of the medical staff have been diagnosed with acute respiratory disease suspected of coronavirus, said Abdulreza Fazel, president of the Medical Sciences University of Golestan Province on March 28, adding, “six physicians are in critical conditions.”

In Khorasan Razavi Province,  northeastern Iran, a group of nurses of the Imam Reza Hospital of Mashhad held a protest on April 5, 2020, because their personal protective equipment and masks are non-standard.

The Iranian Resistance has announced that as of Tuesday evening, April 7, 2020, the coronavirus death toll in Iran has exceeded 20,400 in 245 cities across the country.

On the same day the Health Ministry spokesman declared that none of the cities in Iran are “white” (virus-free), the mullahs’ president, Hassan Rouhani announced that offices and economic institutions would soon be re-opened. Some offices have already started their activities since April 4.

Rouhani said, “Businesses in other provinces will resume their work on April 11, and in Tehran on April 18.”

Rouhani’s administration does not seek to undertake the responsibility of providing the citizens’ basic needs since it is incapable of managing the situation under the quarantine. So, without thinking of the safety and health of the people of Iran, Rouhani is ending the quarantine period.

Rouhani has also announced that for three million families that are “impoverished and deprived sectors … we have considered four support packages from 200,000 to 600,000 tomans [equivalent to $12 to $36].”

This is only a fraction of hundreds of billions of dollars owned by organizations controlled by Khamenei, the mullahs’ Supreme Leader.

It is noteworthy that at the same time that the people of Iran are deprived of any support, the mullahs’ parliament allocated 200 million dollars to the terrorist Quds Force. (The state-run Arman daily, April 6, 2020)

Nurses in the private sector face Discrimination Amid virus Outbreak