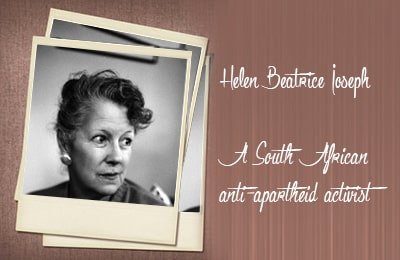 Born in Sussex, England, Helen graduated with a degree in English from the University of London in 1927, and then departed for India where she taught for three years at a school for girls in Hyderabad. In about 1930 she left India for South Africa. She settled in Durban where she met and married dentist Billie Joseph.

She was a founder member of the Congress of Democrats, and one of the leaders who read out the clauses of the Freedom Charter at the Congress of the People in Kliptown in 1955. Appalled by the plight of black women, she played a pivotal role in the formation of the Federation of South African Women and with the organization’s leadership, spearheaded a march of 20,000 women to the Union Buildings in Pretoria to protest against pass laws on August 9, 1956. This day is still celebrated as South Africa’s Women’s Day.

Joseph was arrested on a charge of high treason in December 1956, then banned in 1957. The treason trial dragged on for four years and she was acquitted in 1961. In spite of her acquittal, on 13 October 1962, Helen became the first person to be placed under house arrest under the Sabotage Act that had just been introduced by the apartheid government. She narrowly escaped death more than once, surviving bullets shot through her bedroom and a bomb wired to her front gate. Her last banning order was lifted when she was 80 years old.

She was admitted to the Order of Simon of Cyrene in 1992, this is the highest honour the Anglican Church of Southern Africa bestows on its lay members of the church who have provided outstanding service.

Places named after her include the former Davenport Road in Glenwood, KwaZulu-Natal, the Helen Joseph Hospital in Johannesburg, a student residence at Rhodes University, Grahamstown and a road in Rustenberg.