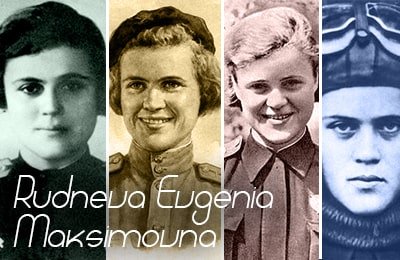 Evgeniya Maksimovna Rudneva, also known as Zhenya Rudneva (December 24, 1920 – April 9, 1944) was a Soviet military air navigator, a Hero of the Soviet Union, a member of the Moscow branch of the Astronomical-Geodesical Society of the USSR, and head of the Solar Department.

She was Ukrainian, born into the family of an office worker. She had completed three years as a student in the Faculty of mechanics and mathematics of Moscow State University prior to October 1941, when she volunteered for Soviet Army.

She graduated from Navigator School and from May 1942 she fought at the front of World War II. There she served in the rank of Guards Senior Lieutenant as a navigator of the all-female 588th Night Bomber Regiment.

She perished valiantly while flying her 645th combat mission near the village of Bulganak, to the north of Kerch. She was shot down by Flak along with her pilot Panna Prokofyeva.

She was posthumously awarded the title of the Hero of the Soviet Union on October 26, 1944.