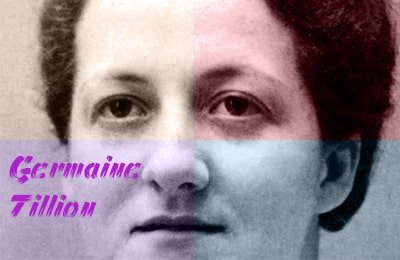 Germaine Tillion: “Our heart is fully committed to the cause of the fatherland”

She was a French resistance fighter and anthropologist. She graduated from the École Pratique des Hautes Etudes, the École du Louvre, and INALCO. Germaine Tillion adopted the attitude of an ethnologist even when she was detained in concentration camps and took advantage of her experience as a deportee to advance her ethnological investigations.

In Ravensbrück, she sought to understand the concentration camp system, which she explains to other prisoners in the form of conferences or an “operetta-magazine.”

As a historian and ethnologist, she sought to articulate the right balance between objective data and subjective experiences. As part of her thesis, she made four trips to Algeria between 1934 and 1940 to study the Berber ethnic group of Chaouis present in the Aurès.

Back in France at the time of the 1940 armistice, her first act of resistance was to give her family’s papers to a Jewish family who would thus be protected until the end of the war.

After the arrests and the executions of Boris Vildé, Anatole Lewitsky, the arrest of Paul Hauet, Germaine became leader of the network of Resistance from 1941 to 1942, later approved under the name of group of the Museum of Man. Germaine Tillion was arrested on August 13, 1942, and deported on October 21, 1943 to Ravensbrück concentration camp.
She lost her mother, a great resistance fighter, deported in 1944 and gassed in March 1945.
During her internment at the camp, she wrote in a carefully hidden notebook, an operetta Le Verfügbar in Hell where she humorously recounted the harsh conditions of detention, with popular tunes taken from the lyric or popular repertoire.

She avoided death by escaping a convoy to the Mauthausen camps thanks to hospitalization and accomplices.

After the war, she devoted herself to works on the history of the Second World War (investigation of Nazi war crimes, on Soviet concentration camps between 1945 and 1954) and then on Algeria. After the Algerian war, she engaged in various political battles: against the homelessness of the Algerian people; against torture in Algeria; for the emancipation of Mediterranean women, who must by economic obligation have many children but also give priority to sons over daughters.

In 1999 she was raised to the dignity of Grand Cross of the Legion of Honor, one of six women, with Geneviève de Gaulle, Valérie André, Jacqueline de Romilly, Simone Rozès and Christiane Desroches Noblecourt.
She died on Saturday April 19, 2008 at her home in Saint-Mandé (Val-de-Marne) in her 101st year.

Germaine Tillion believed that everyone must remain vigilant in the face of the evil that may return: “At the end of my journey, I realize how fragile and malleable the man is. Nothing is ever acquired. Our duty of vigilance must be absolute. Evil can come back at any time, it smells everywhere and we must act when there is still time to prevent the worst.” For her, Nazism was the embodiment of evil.

Germaine Tillion believed that hatred between two communities comes from a lack of space, and that the challenge of the 21st century is the survival of an ever-growing humanity on a planet with limited resources.

She was a leading ethnologist who studied the concentration camps, but also colonial society and the fate of women in Algeria.