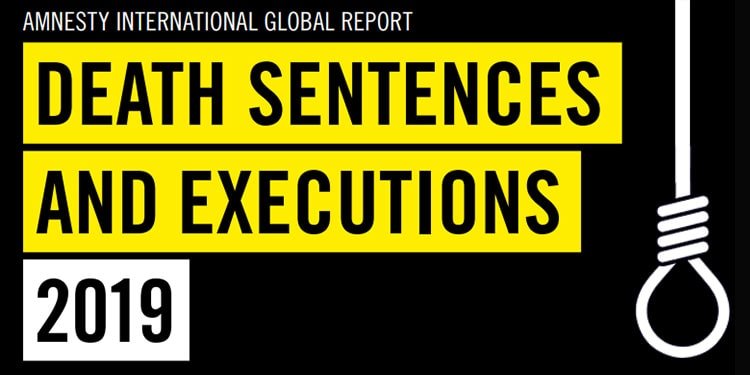 Amnesty International put out its annual report on the use of the death penalty around the world, listing Iran as “the world’s second most prolific executioner” in 2019.

Published on April 21, 2020, Amnesty International’s 2019 global review of the death penalty underscored that Iran accounted for 38% of “known executions in the world.” At least 657 executions were carried out in 2019, of which 251 took place in Iran.

Iran continued to hide the full extent of their use of the death penalty by restricting access to death penalty information, Amnesty International said in its news release. “Iran is second only to China in its use of the death penalty. It put to death at least 251 people in 2019, compared with at least 253 in 2018 – four of whom were below 18 at the time of the crime. However, a lack of transparency makes it difficult to confirm the real total number of executions – which may be far higher.”

The Iranian Resistance’s records indicated that a total of 273 executions took place in Iran in 2019, including 16 women and 9 juveniles.

Amnesty International said at least 13 public executions were carried out in Iran in 2019; four persons were executed for crimes that occurred when they were under 18 years of age; the death sentences were carried out “after proceedings that did not meet international fair trial standards”, and “confessions” forcibly extracted under torture and other ill-treatment were used to sentence people to death.

In the global review of the death penalty it was asserted that “under Iran’s Islamic Penal Code, boys aged above 15 lunar years and girls aged above nine lunar years who are convicted of murder and certain other capital crimes may be sentenced to death in the same way as adults.”