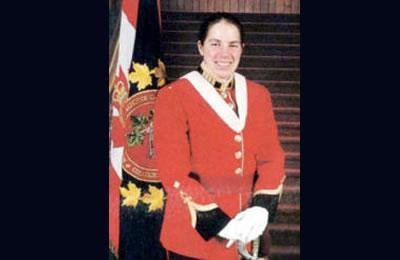 Captain Nichola Kathleen Sarah Goddard, MSM (May 2, 1980 – May 17, 2006) was the first female Canadian combat soldier killed in combat, and the 16th Canadian soldier

killed in Canadian operations in Afghanistan.

Born to British and Canadian school teachers in Madang, Papua New Guinea, Goddard spent most of her childhood in various locations, including Black Lake and Lac la Ronge, Saskatchewan. She attended Jr. High in Edmonton, Alberta, and High school in Antigonish, Nova Scotia. Nicknamed “Carebear”, by her ski team in Nova Scotia, her hobbies included cross-country skiing and running, and she had competed in biathlon events. She led a local Scout troop with her fiancé (later husband), Jason Beam, while they were officer cadets at the Royal Military College, in Kingston, Ontario.

Captain Goddard arrived in Afghanistan in January 2006, and had been serving with Princess Patricia’s Canadian Light Infantry as a forward observation officer at the time of her death; her parent unit was the 1st Regiment Royal Canadian Horse Artillery.

Goddard was killed on May 17, 2006, during a firefight in the Panjwaye District. It was part of a joint two-day operation between Canadian and Afghan troops, to secure Kandahar’s outskirts after a rumor of Taliban preparations to launch an assault on the city. As troops were moving into a mosque to capture 15 alleged Taliban members, several dozen hidden militants began firing from neighbouring houses. As a crew commander, Goddard was standing half-exposed in her LAV III, which was hit by two rocket-propelled grenades early in the battle. The battle lasted most of the day on the 17th and into the night, and ended shortly after an American B-1 Lancer dropped a 225 kg bomb. In the end, the two-day operation saw Goddard, an Afghan National Army soldier, and 40 Taliban killed, as well as approximately 20 Taliban captured.