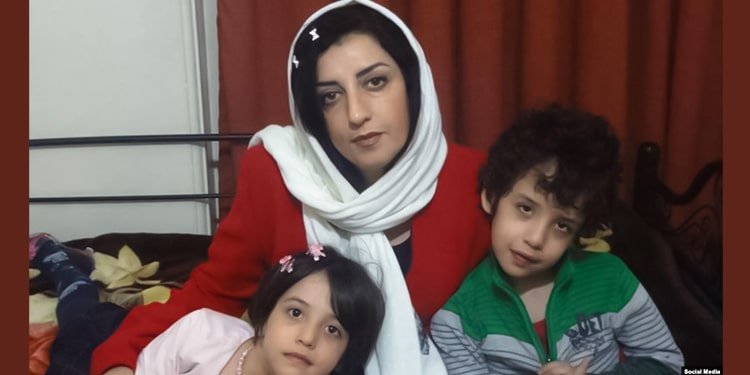 Political prisoner Narges Mohammadi starts another year of her sentence

Struggling for justice, freedom and human rights is worth losing whatever I had

Political prisoner Narges Mohammadi marked the beginning of the sixth year of her imprisonment by sending an open letter from the Central Prison of Zanjan.

In her brief letter, Narges Mohammadi writes about female inmates who are victims of patriarchal laws. She also expresses her pride in having stood up for the cause of deprived people.

Following is the text of her letter:

“I begin another year of my oppressive prison sentence.

Sharing the suffering of the victims of poverty, corruption, despotism, and rule of patriarchal laws, I am spending my time in prison among my sisters. I stepped into this path to defend the rights of these women. I am serving my sentence beside people whose poverty and hunger compelled me to protest.

“The judicial and intelligence authorities have even banned giving me books. I wished to have a book on my birthday. Alas! My gift this year was sitting face to face with victims whose fate puts me in great pain. Learning of the fate of a woman who had to steal a maize snack to feed her hungry child, a woman who prostituted to avoid sleeping in the street at nights, and the fate of women whose being deprived of the right to divorce has led them to the gallows and to the stoning pit.

“Witnessing their pain and suffering, their destitute life and their deaths, has brought about a new birth for me.

“In this cold and difficult place, I stand tall, heartbroken but happy, and I am beginning another year of my oppressive imprisonment. This life, however difficult, gives me confidence and faith that struggling for justice, freedom and human rights is worth losing whatever I had and even losing the chance to hear the childish voices of my Ali and Kiana.”

Narges Mohammad was detained in the Women’s Ward of Evin Prison until December 25, 2019, when she was forcibly transferred out of Evin and taken to the Central Prison of Zanjan.

Ms. Mohammadi suffers from various illnesses including emboli in the lungs and muscular paralysis.

Earlier, her lawyer announced that the Iranian Judiciary has turned down her request to go on furlough to avoid getting infected during the coronavirus outbreak.